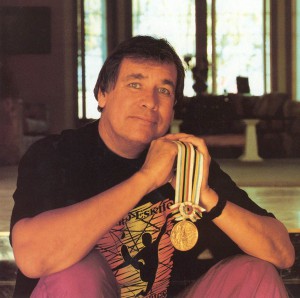 ATSU’s National Center for American Indian Health Professions (NCAIHP), the Society of American Indian Dentists and Running Strong for American Indian Youth hosted guest speaker and former Olympic champion Billy Mills on Feb. 19. Billy Mills, Oglala Lakota (Sioux), was raised on the Pine Ridge Indian Reservation in South Dakota. Surrounded by poverty and orphaned at the age of 12, Mills started running to channel his energy into something positive. In high school, his gift for running became more apparent and he set records in numerous track events.

Mills went on to earn a track scholarship from the University of Kansas and then served as an Officer in the United States Marine Corps. At the 1964 Olympics, Mills came from behind to win the gold medal in the 10k race. He is still the only American to ever win a gold medal in the 10k event. Wanting to give back to his community, Mills helped found Running Strong for American Indian Youth and became the organization’s national spokesperson. He was awarded the 2012 Presidential Citizens Medal by President Obama, for his work with Running Strong.

Today, Mills visits American Indian communities throughout the U.S. and speaks to youth about healthy lifestyles and taking pride in their heritage. On Feb. 20, Mills was also on hand for the 5k run and fun walk sponsored by the NCAIHP and Ross Farnsworth East Valley YMCA and held on the ATSU Arizona campus. Proceeds will go toward ATSU scholarships for American Indian and Alaska Native students.