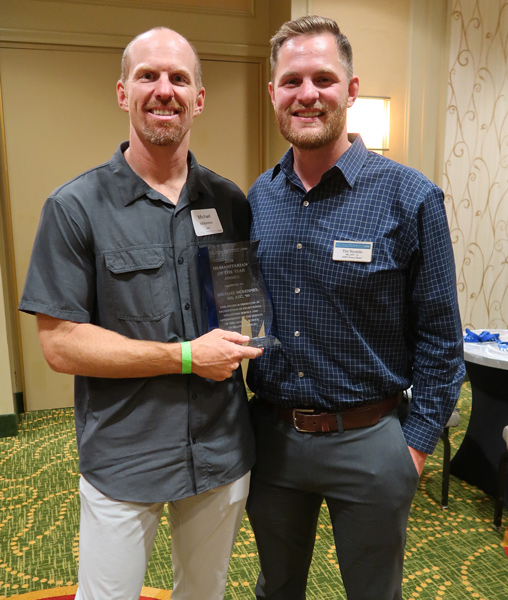 Michael McKenney, MS, ATC, ’99, received the Humanitarian of the Year award from A.T. Still University’s Arizona School of Health Sciences (ATSU-ASHS) Alumni Chapter Board. McKenney received the award on June 28 at the athletic training alumni reception held during the National Athletic Trainers Association annual meeting in New Orleans. The award honors ATSU-ASHS graduates who have demonstrated exceptional dedication, enthusiasm, and leadership through nonprofit organizations or other outstanding volunteer service. The award is given to those alumni who advance the mission of the University through dedicated volunteer efforts in support of its programs, thereby ensuring the University’s impact on our community and future generations of students.

McKenney has continued to have a strong presence in the local community of athletic trainers as a part of the Arizona Athletic Trainer’s Association. Most recently he has served as the committee chair for the Professional Education Committee, which is dedicated to organizing and promoting educational programs for members of the association. He works to provide education and encompass the diverse and evolving aspects of athletic training.

McKenney has also served many local athletic associations to provide medical care, including Desert Vista’s lacrosse team, Grand Canyon University lacrosse, Arizona Youth Lacrosse League, USA BMX World Championships, USA BMX Olympic Trials, and most recently been a part of the ESPN X Games. No matter the level of competition or athletes, McKenney always provides optimal care for the patient as a person in addition to the needs as an athlete or professional.

In terms of his continued connection with ATSU, McKenney has served as a preceptor for graduate athletic training students from 1999-2012 while at the Fischer Institute of Physical Therapy & Performance. He has also presented at the Arizona Athletic Trainer’s Association in addition to his committee involvement which included advanced joint mobilization of the lower extremity, preventative screening strategies for overhead throwing athletes, evaluation and treatment of the overhead athlete’s shoulder, and principles of rehabilitation. This adds to the continued efforts to give back to the profession and is a direct representation of what ATSU’s vision and mission describe.

Congratulations to Michael McKenney on this well-deserved recognition!