Beyond the Campus Walls: PA students blazing the trail for health in an underserved Georgia town 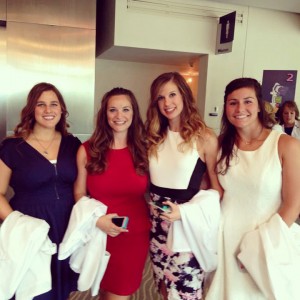 Four A.T. Still University-Arizona School of Health Sciences (ATSU-ASHS) students can be called true pioneers since they are the first ATSU-ASHS cohort at the Albany Area Primary Health Care in Albany, Georgia. Lindsay Collins, Jennifer Clark, Clair Crumrine, and Kate Nemecek, class of 2016 physician assistant (PA) studies students, are currently finishing their clinical rotations at Albany Area Primary Health Care. Albany is an old town in southwest Georgia with a long history of diversity and perseverance. Poverty and disparity have ravaged the people there for generations. “About 30 years ago, Dr. James Hotz came to Albany from a large metro area and opened three primary healthcare clinics in the area,” said Crumrine. These clinics are now among one of the Community Health Center campuses where ATSU PA students complete their clinical rotations. She also notes that the movie, Doc Hollywood, is roughly based on Dr. Hotz. According to Crumrine, the unemployment rate is high, the teen pregnancy rate is even higher, and Albany has the second highest STD infection rate in the State of Georgia. “Primary care is also desperately needed in this area due to the increased rates of chronic diseases such as hypertension, diabetes and obesity,” said Crumrine. “The population in Albany is about 85% African American,” said Collins. “There are extremes in financial demographics. You have elite farmers, people who have owned land for as long as we have been a country—generations upon generations of passed-on traditions and tractors. Then you have people who can’t afford electricity in a rundown shack of a home.” “All of the patients I see are low income and have a very limited understanding of their health,” said Clark. “They take whatever the provider tells them as fact.  I feel responsible to learn as much as I can and stay on top of current research to help these patients.” Although arriving at ATSU from across the U.S. and from varied undergraduate program backgrounds, all four students agreed that ATSU’s mission to reach the underserved in their role as a PA was their goal. Crumrine was a critical care nurse and worked as a U.S. Army Civilian.  As a child growing up in Texas, she had aspirations of becoming a veterinarian, marine biologist or an astronaut. “Everything is bigger in Texas,” Crumrine jokes. Jennifer Clark was majoring in landscape management at Brigham Young University, Lindsay Collins was studying to become a physical therapist, and Kate Nemecek’s motivation to become a PA was due to her personal experience with competitive sports injuries and being treated by PAs. “I talked with several ATSU alumni who had nothing but good things to say about the PA studies program,” said Nemecek. As well, the student ambassadors for the program answered all my questions via email and were extremely thorough in their responses. Ultimately, it seemed like the faculty really cared about your success and would do everything in their power to not let you fail.” Clark grew up as the youngest of seven children, and her dad was a general surgeon. “When I was a senior in high school, my father passed away after a long battle with adenocarcinoma of the lung,” she said.  “He was definitely a factor in my decision to go into medicine and how I want to practice. I appreciate ATSU’s approach to medicine as whole person healthcare. To me it just makes sense.” No day is typical at Albany Area Primary Health Care. Collins, Clark, Crumrine and Nemecek are blazing the path for other ATSU-ASHS PA students to provide care in Albany. Clark recently shared one of her patient experiences. “One night we had a woman come into the ER whose boyfriend had been beating her,” said Clark. “While I was stitching the large laceration above her eye, we had a conversation about what she was going to do after leaving the ER.  We talked about not staying in a relationship where she was being abused.  I don’t know if she left him or if our conversation made a difference, but I hope it did. It was one of those surreal moments for me when I realized I had both an obligation and an opportunity to treat more than just the superficial wound.” As for plans after graduation in August 2016, the women have varied plans. Crumrine is recently engaged and will marry after graduation. “I plan to move back to Arizona with my fiancé and find a job working in critical care. I want to volunteer with an organization that helps the homeless and veterans get the care they need. I also want to travel and possibly teach at the university level.” Collins is still undecided as to where she will go after graduating from ATSU. “I wish I knew what type of medicine I’d like to go into. It is difficult to pick, because I have enjoyed every rotation very much. I know I would like to work at a Veterans Administration health facility, and I’m flexible in whatever area there is a need.” Clark does not have a firm location, but says she loves surgery and would be happy to be doing that anywhere. Nemecek plans on working in Arizona. ”I would like to specialize eventually, but I intend on starting out in family practice to build my knowledge and fundamentals.”

Beyond the Campus Walls: PA students blazing the trail for health in an underserved Georgia town