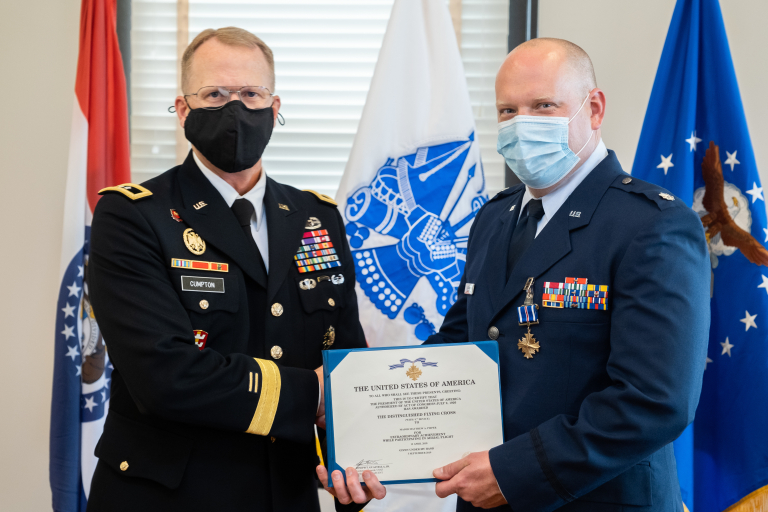 According to a story by Airman 1st Class Whitney Erhart, 131st Bomb Wing, published by the Air National Guard, Dr. Pieper received the award for life-saving measures he performed on a partner-force soldier while assigned to a joint medical unit in 2018 in northern Afghanistan.

Dr. Pieper and his team would normally operate on the platform of a CH-47 Chinook helicopter with more room. During this particular mission, the Chinook wasn’t able to get there due to logistical concerns.

With the Chinook unavailable, arrangements were made with the medical evacuation crew. Any patients with minor injuries would be picked up and brought back to Dr. Pieper and his team. If there were patients with traumatic injury, Dr. Pieper’s four-man team would split into two groups and each accompany one of the HH-60 Black Hawk helicopters.

When a situation arose, the medical evacuation crew was already prepared to take off due to previous reports of patients with minor injuries.

“I talked to their ground commander and said, ‘Hey, I think our team should be on these helicopters because the last patient report showed some people were badly injured,’ and he agreed,” said Dr. Pieper.

The Black Hawks were already taking off as the medical personnel came outside. Dr. Pieper jumped in but the rest of his team didn’t make it onboard.

“The man that I was taking care of was passing out,” said Dr. Pieper. “There was a young medic with me and I asked him to start an intraosseous line.”

An intraosseous line is when a catheter is placed directly into the bone marrow.

As his patient continued to decline, Dr. Pieper secured the soldier’s airway and then noted an unequal chest rise, warranting him to do a bilateral chest needle decompression by inserting a needle into his chest. He assessed the patient again and he had no pulse. Dr. Pieper immediately started cardiopulmonary resuscitation.

“Then I grabbed the hands of one of the other Afghan soldiers and I showed him, ‘Like here, you do CPR,’” he said. “I reached back and grabbed my equipment and I cut his chest open. It’s an emergency thoracotomy. There was a lot of blood in his chest, so I clamped his aorta and twisted his lung so that it wouldn’t bleed anymore. I pumped his heart for about five minutes and then he came back.”

Dr. Pieper then radioed for his team to meet him when the helicopter landed about 15 minutes away from where the fighting was. There they had a tent and more equipment.

“We stapled off the bottom half of his lung which was bleeding, gave him eight units of whole blood, washed out his chest and put on a temporary dressing,” he said.

The patient was then transported to an air base where he was taken to surgery, washed out, closed up and has done well since, said Dr. Pieper.

“I felt lucky to have been able to be there when the guy needed me to,” he said. “I can’t take credit for creating the idea of the surgical resuscitation team, but I did train for a long time to be able to do it and I felt lucky to find myself in the situation where I could help a person. Sometimes you can’t get there and sometimes you can and you still don’t have a great outcome.”

The Distinguished Flying Cross was authorized by an Act of Congress July 2, 1926. President Coolidge presented the first Distinguished Flying Cross to Capt. Charles A. Lindbergh of the Army Corps Reserve, June 11, 1927. The medal is awarded to any officer or enlisted member of the U.S. armed forces who distinguishes themselves by heroism or extraordinary achievement while participating in an aerial flight in support of operations. 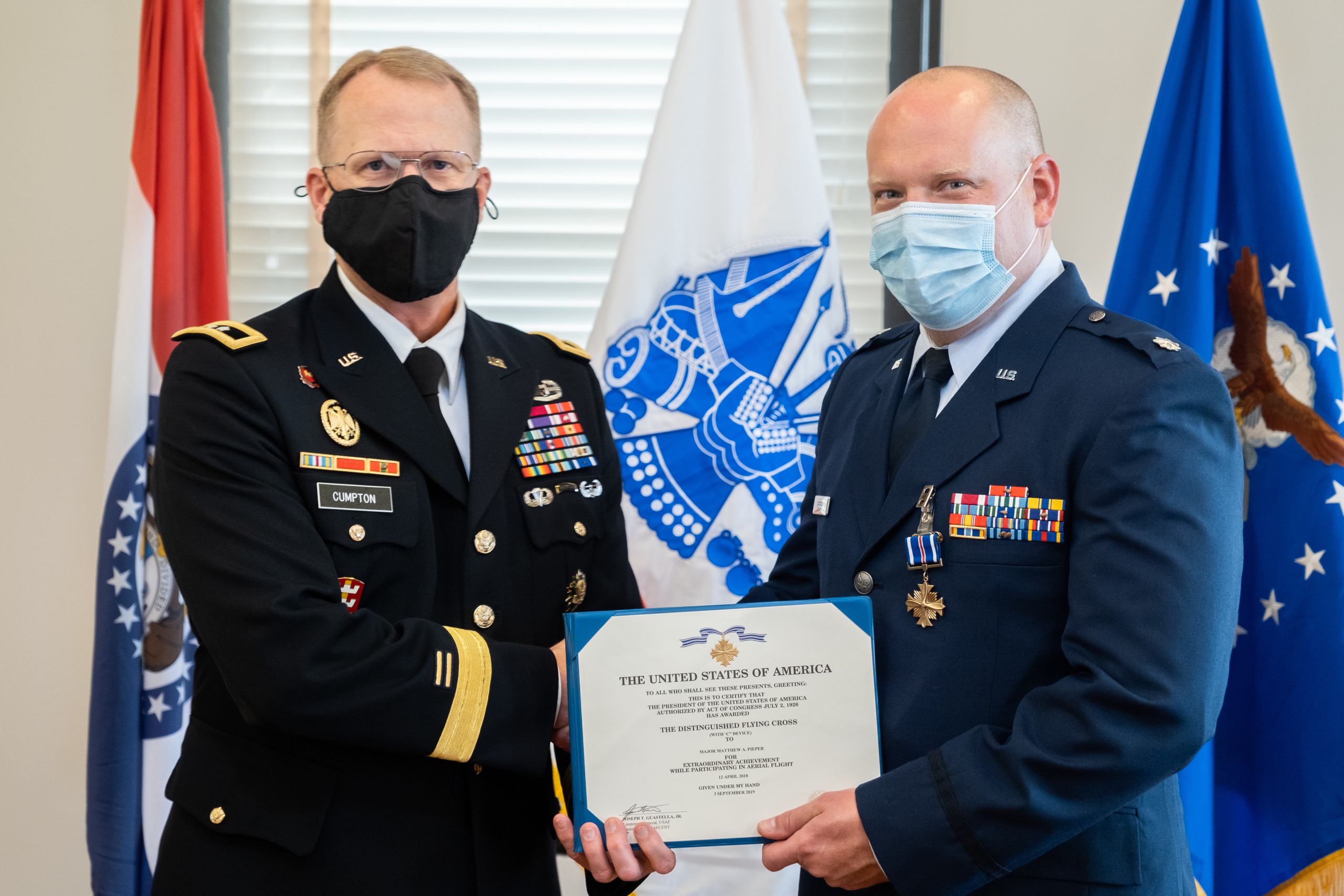