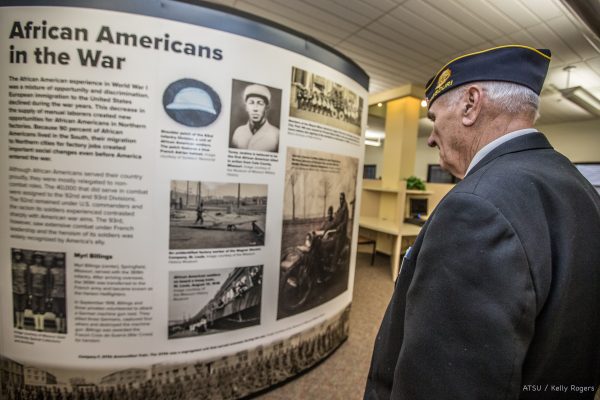 On Friday, March 9, the A.T. Still Memorial Library and the Museum of Osteopathic Medicine hosted a public open house to introduce a traveling exhibit, “Missouri and the Great War,” detailing Missouri’s vital role in World War I.

The event included a memorial presentation and a gun salute. Shawn Faulkner, PhD, professor of military history at the U.S. Army Command and General Staff College, gave a presentation entitled, “Modern Medicine for a Modern War: Military Medicine in the American Expeditionary Forces.” Guests viewed artifacts on loan from the Museum of Osteopathic Medicine and Adair County Historical Society and Museum.

“The A.T. Still Memorial Library is proud to host this exhibit detailing Missouri’s contributions to the war effort,” says Debra Loguda-Summers, library public service manager. “The sacrifices made by ordinary people in a time of crisis are something we as Missourians should be proud of.”

The exhibit was inspired by a website, “Missouri Over There,” developed by the Museum of Osteopathic Medicine, in collaboration with several organizations.

“Uniquely, Missouri had the only statewide initiative to tell the stories of those who served and were affected by the Great War,” says Jason Haxton, MA, museum director. “Osteopathic medicine is part of that rich history. Creating the website was an enormous undertaking over many years, but in hindsight was well worth all the time and energy. Here in Kirksville, the website and traveling exhibit have had a huge impact on the community, and generated widespread expression of connection and interest.”