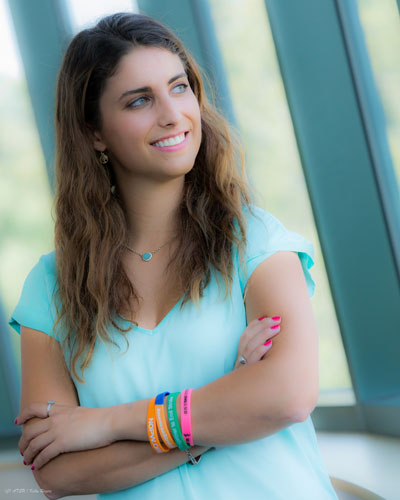 There she was – lying flat on the floor and unable to move. Her phone was too far away to call for help. She knew something was wrong, but did not have the strength to move or even scream for help. This scenario is everyone’s nightmare, but for Sydney Priest, it was reality.

As a second-year medical student at ATSU-KCOM, Priest thought her main challenge was passing her board exam. She had no idea she’d soon be facing the biggest challenge of her young life.

Her day started just like any other. After classes, she went back to her apartment to have lunch and continue her studies. Something felt different though. She started to feel dizzy and nauseous. In an attempt to sleep it off, she went to bed. She could not fall asleep, and her nausea never stopped. She ran to the bathroom to try to compose herself. Then it happened. She tried to go back to bed but suddenly couldn’t walk. Her right side was weak, and she was forced to crawl. In her attempt to call for help, she grabbed for her phone but accidentally kicked it across the room.

For hours, she lay still. Paralyzed, weak, and helpless, Priest feared the worst. Her parents and boyfriend tried to contact her. After multiple failed attempts, they too knew something was wrong and reached out to her friends and classmates.

Shortly thereafter, her friends walked into the surprisingly unlocked apartment to check on her. They found Priest unresponsive on the floor. Shocked, they immediately dialed 911, and she was rushed to the hospital. Results of the CT scan revealed a stroke.

Due to of the severity of her condition, Priest was flown to University Hospital in Columbia, Missouri. There, doctors discovered she experienced a basilar artery occlusion, a rare kind of ischemic stroke. These strokes occur because of an obstruction within a blood vessel supplying blood to the brain.

With Priest still unresponsive, the medical team was unsure when the symptoms began. Without a timeline, they could not administer tissue plasminogen activator, a clot-breaking medication. Instead, an emergency procedure was required to remove the 3-centimeter blood clot in the back of Priest’s brain. Thankfully, she came through the operation without any complications.

Meanwhile, back on ATSU’s Kirksville, Missouri, campus, news broke of Priest’s sudden medical emergency. Faculty, staff, and students banded together to support her. Some made personal visits to the hospital. Several others created a video to wish her a speedy recovery.

In an overflowing Mehegan Classroom, faculty, staff, and students were shoulder-to-shoulder signing cards full of well wishes. A GoFundMe page was created and raised more than $13,000 for Priest and her family. Students organized sporting tournaments to contribute to the cause, and bright pink bracelets emblazoned with the words “Sydney Strong” were sold to further aid Priest’s recovery.

“I just had so much support from my family, ATSU, and various others across the country,” says Priest. “It was incredible.”

Her widespread support propelled her through the grueling rehabilitation process. To regain strength and mobility, her rehabilitation began during her two-week stay in intensive care at University Hospital. She was then transferred to the University of Kansas Hospital’s rehabilitation inpatient center. There, she was able to concentrate on her recovery and be close to her family.

Priest’s rehabilitation at University of Kansas lasted about a month. For five days a week, she had physical, speech, and occupational therapy. The therapists engaged her in exercises focused on basic movements such as walking, swallowing, and eating. Through the hard work of Priest and the rehabilitation staff, she was able to regain her ability to walk, eat, and even drive. Considering the severity of the stroke, her incredibly fast recovery was almost unheard of.

“Honestly, if it wasn’t for them, I would still be paralyzed,” Priest says.

Back on track and healthy, Priest’s focus once again shifts to her studies. She maintains her status as a medical student, but the academic challenges will not be any different from before. Although memories of what happened that fateful day still linger, the support from her campus family helps her readjust.

“She’s an amazing friend and such an integral part of our ATSU family,” says Samantha Greenseid, OMS II. “I’m just so happy she’s back.”

Prior to the stroke, Priest intended to become a pediatric cardiologist. She wanted to pursue that path because she could relate to those it affected, since she was born with a congenital heart defect and lives with a pacemaker. However, after the incident, she now wants to serve in the field of rehabilitation medicine and help others going through similar rehabilitation experiences.

“I’ve been so inspired by my rehab doctors,” says Priest. “I want to be able to encourage others and let them know I’ve been there. I want them to know they can recover too.”

After overcoming the odds, Priest is ready to resume classes and take on a new set of challenges. It’s her spirit, compassion, and empathy that motivates and enables her to endure the struggles of medical school while still recovering from the debilitating stroke that changed her life. While she focuses on school and recovery, the University as a whole sees her as an inspiration. They see her as a model of persistence and perseverance. More than anything, they see her as strong – Sydney strong.