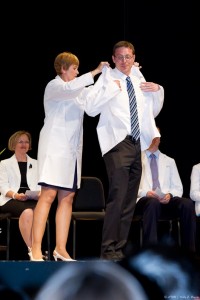 Karl Boehm, pre-doctoral fellow, class of 2016, addressed the new class and welcomed them to the University. Christine Beeson, OMS II, presented the key to A.T. Still’s log cabin to the new class, which symbolizes the obligation freshman have in preserving the heritage of ATSU-KCOM and osteopathic medicine.

Members of the class of 2017 were presented with their white coat by Margaret Wilson, DO, dean, who concluded the ceremony by asking the students to join her in reading the Osteopathic Pledge of Commitment.

The ceremony was held at Baldwin Hall on the Truman State University campus.