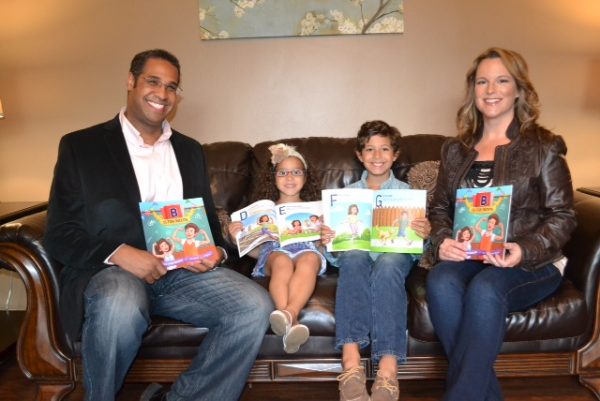 A few years ago, A.T. Still University’s Arizona School of Health Sciences alumnus, James Randolph, DPT, PT, ’17, was browsing a bookstore with his wife, Amy Randolph, PT. The health professionals were shopping for educational books about anatomy and physiology for their children, 8-year-old Jayden and 5-year-old Hailey. After an exhaustive search of the children’s section, they left the store empty-handed.

The experience inspired James and Amy. They couldn’t find what they were looking for at the bookstore, so why not write the book themselves?

The result was “B Is for Biceps: Anatomy for Children,” a fun, interactive rhyming book that uses the alphabet to teach children anatomical terms. The main characters are named Hailey and Jayden, after the Randolphs’ children. Even the family’s golden retriever, Sadie, makes an appearance.

“We wrote the book we wanted our children to read,” says James.

For the novice authors, however, writing the book was just the first step in a complicated publishing process. Step two was finding a publisher. Unsure of where to begin, the resourceful pair checked the inside covers of books they had around the house. This led them to Faith Books and More, a publishing service for independent authors. The publisher then introduced them to Jhoselyn Figueras, a talented illustrator.

“She took the ideas that we had in our heads and drew them better than what we could have imagined,” says James. “When we received the final proof copy, it was incredible to see that our concept had actually become a book.”

According to the Randolphs, “B Is for Biceps” is geared for children between the ages of 4 and 10. Some of the terms, such as “lungs,” are simple, while others, like “xiphoid process,” are more advanced.

“We say ‘C is for cranium,’ rather than cat,” says James. “If we start teaching these terms early, they can be learned easily.”

The goal of the book is to introduce children to anatomy and physiology in a fun way, hopefully sparking an interest in healthcare.

“We saw an opportunity in the community to educate people about anatomy and promote health awareness,” says James. “The schools place a lot of emphasis on math, which is important, but healthcare is important, too. We didn’t think it was emphasized enough, and it’s something we wanted our kids to be exposed to.”

It turns out, they weren’t the only parents who felt this way.

“People tell us, ‘I haven’t seen a book like this before,’” says James. “We love to hear that because that’s one of the reasons we wrote it. We hadn’t either.”

The book has been well received by the community. Several local hospitals have promoted it to their staff. It’s also being used in elementary school classrooms to complement anatomy lessons. Most importantly, Hailey and Jayden are thrilled with it.

Determined to raise awareness about the health professions, the Randolphs plan to continue writing. They are currently working on a second book, and hope to eventually turn their ideas into a series.

“It’s been an experience,” says James. “We’re learning as we go along. There’s definitely a learning curve, but we’re excited. We want to get out there and build awareness, not just for kids, but for everyone.”