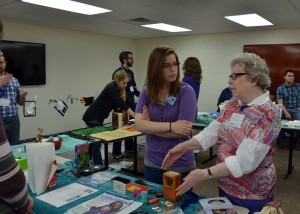 The Museum of Osteopathic MedicineSM, with the Illinois Heritage Association, hosted an emergency preparedness workshop on April 25-26, 2014, which was open to libraries, archives, and historical societies/museums from Missouri and surrounding states.

The training concluded with a hands-on, mock salvage operation given by Miller and Eves and fire extinguisher demonstration by the Kirksville Fire Department. The free workshop was part of a National Endowment for the Humanities grant awarded to the Museum of of Osteopathic MedicineSM.