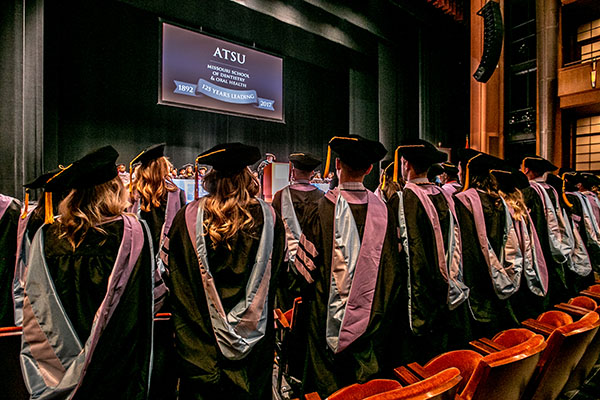 All 42 students from ATSU-MOSDOH’s first class graduated on June 10.

When ATSU began the creation of a new dental school in Missouri, its primary goal was to educate community-minded healthcare providers who would address oral healthcare disparities in the state and across the nation. After years of planning and progress, the School celebrated a long-awaited milestone when its inaugural class graduated June 10, 2017. On that day, the same 42 students who took a chance on ATSU-MOSDOH became 42 dentists who pledged to care for their patients and communities in Missouri and beyond.

“By accepting a seat in the inaugural class of a brand new dental school, we automatically chose to walk along the road less traveled,” said Dr. Gerber. “Little did we know when we began here what we were in for, and that we were taking on such a tremendous responsibility that has now become such a great honor.”

ATSU-MOSDOH’s unique approach to dental education provided these graduates with invaluable learning experiences that shaped them personally and professionally. As students beginning the program in Kirksville, they spent their first and second years in the classroom and dental simulation clinic, learning in a state-of-the-art facility that would prepare them for clinical settings. They also participated in community outreach events focused on oral health education, particularly for children.

As third- and fourth-year students at the St. Louis Dental Education and Oral Health Center, they gained hands-on experience with patients in need. They continued their outreach programs in underserved areas, and they formed strong bonds within the St. Louis community. These community bonds were evidenced when more than 20 patients attended the commencement ceremony to watch their student dentists officially become dental healthcare professionals.

From day one, expectations of this group were high. Even so, the classmates worked hard, supported each other, and successfully pushed through challenges, including a compressed schedule during their first year. Ultimately, they left ATSU on a high note as they received a 100 percent pass rate on their dental licensing examinations.

“Today is a great day – a historic day, adding strength to the legion of total healthcare professionals in our state and our country,” said the Honorable Jeremiah W. “Jay” Nixon, JD, who delivered the commencement address. “Each of you graduates will no longer be the same; you will be leaders in your profession, your communities, and your growing world.”

Nixon supported ATSU-MOSDOH from its beginning. He was governor of Missouri when plans for a new dental school were developed, and he endorsed Kirksville as the location for the School in 2010. He shoveled dirt at Kirksville’s groundbreaking ceremony in March 2012 as well as St. Louis’ clinical site groundbreaking in April 2014.

After the graduates crossed the stage to receive their diplomas and lilac hoods, ATSU President Craig M. Phelps, DO, ’84, conferred their degrees. Allison Crutchfield, DMD, ’09, MPH, ’14, another original faculty member of the School, led the “Oath to the Profession,” and then, David Goldman, DO, JD, ’91, president of the Kirksville Osteopathic Alumni Association, inducted the graduating class as ATSU alumni.

“You are the students, along with your faculty, who have changed the paradigm of dental education,” said Dr. Phelps in his closing remarks. “You have what our country needs, and in fact, you have what our world needs.”

ATSU-MOSDOH’s innovative model for dental education has proven successful. In addition to graduating its inaugural class, the School received notification in August it had been granted “accreditation without reporting requirements” from the Commission on Dental Accreditation (CODA). This status, the highest rating awarded by CODA, indicates ATSU-MOSDOH is now fully operational. It also signifies the School has fulfilled its promise to graduate dentists who will serve the underserved.

“The four-year journey, as challenging as it seemed, witnessed marriages, births, sorrows, disappointments, accomplishments, celebrations, and the forging of what will be lifelong friendships,” said Dr. McLeod. “Your career paths, as exciting and fulfilling as they may be, will lead you back to your home, ATSU-MOSDOH.”

These 42 classmates, with different backgrounds and experiences, came together in 2013 with a common goal of becoming competent healthcare professionals. Molded by their education, they learned how to treat patients well and with compassion. They accomplished their goal and set the stage for future graduates. No matter where their individual career paths lead, they will always be exceptionally trained dentists who were made in Missouri.