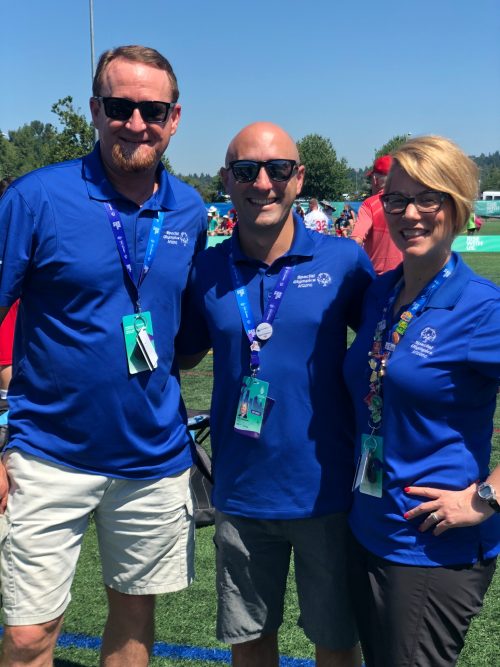 Dr. Farris began working with the FUNfitness program through Special Olympics Healthy Athletes over nine years ago. FUNfitness was developed by a group of physical therapists from the American Physical Therapy Associate for Special Olympics athletes. Through his work with FUNfitness, Dr. Farris was asked by the CEO of Special Olympics Arizona if he would assemble and lead a medical and health team to travel with the Arizona athletes to national competitions.

“The idea was that the health team would be with our state’s athletes the whole week to make sure they were healthy and able to play each day,” Dr. Farris said.

Dr. Anderson and Natasha joined Dr. Farris to form the medical and health team. While Special Olympics provides full medical coverage for the games, Arizona’s delegation is one of the largest at 137 athletes, partners, coaches, and administrators, and the CEO of Special Olympics Arizona wanted to have a team to work directly with the state’s athletes.

The medical and health team began their journey with the athletes during training camp the weekend before the games. They traveled and lived with the athletes, coaches, and others during the five days of games in the Seattle area.

The experience left a mark on Dr. Farris. “Individuals with intellectual disabilities are one of the most underserved populations in the nation with regard to healthcare. Being involved with Special Olympics is one way that I can help serve this group of great people and it’s kind of funny—I always walk away feeling like I received more than I gave,” he said.