Dr. Sandra Lindsay becomes first person in U.S. to be vaccinated against COVID-19, ushering in a sense of hope after a devastating year.

Dec. 14, 2020, was going to be a memorable day for Sandra Lindsay. As COVID-19 vaccines neared availability in the weeks prior, Lindsay, DHSc, MBA, MS, RN, CCRN-K, NE-BC, ’21, director of nursing in the critical care division at Long Island Jewish Medical Center, part of Northwell Health, made no secret of her desire to be inoculated as quickly as possible, and Dec. 14 was the day.

When she sat down that morning and received the injection, media outlets were present, their cameras rolling and flashes firing. She said a few words before trying to say goodbye and head back to work.

Not so fast. As she quickly learned, Dr. Lindsay wasn’t just the first to be vaccinated in her hospital, in the city, or even in the state of New York. She was the first person in the United States of America to receive the vaccine.

And the entire nation was waiting.

“I did not expect the extent to which this happened,” said Dr. Lindsay, who completed her doctor of health sciences degree from ATSU-CGHS in March 2021.

She sat for three different press conference sessions, to maintain social distancing in the massive media crowds. Major networks began calling for interviews. Across the country and around the world, people wanted to hear what Dr. Lindsay had to say.

It was a long day in a long year, but a day of light instead of so many others full of darkness. Hundreds of thousands of Americans had died from COVID-19, and New York City had grimly represented the epicenter of the U.S. outbreak for many months. A vaccine symbolized the beginning of the pandemic’s end, Dr. Lindsay said, and though she somewhat unexpectedly found herself in the spotlight, she was ready to use that platform.

“I feel hopeful today, relieved,” Dr. Lindsay told the media. “I feel like healing is coming.”

She has continued to share that message whenever given an opportunity, especially when speaking to fellow members of the Black community. Statistics have shown Black Americans to be disproportionately affected by COVID-19 and dying from the disease at rates several times higher than white Americans. Dr. Lindsay understands and respects the hesitancy of many in the Black community to get the vaccine, and hopes she can serve as an example.

“Being able to share my experience and hear their concerns and clarify misconceptions, debunk any conspiracy theories they may have heard, that’s been rewarding for me to get the opportunity on these platforms to do that,” said Dr. Lindsay, who experienced no side effects. “The truth matters. Unfortunately, that spreads more slowly than the conspiracies.”

This is a natural role for Dr. Lindsay, who herself is a natural leader. It’s a trait she learned from her grandmother, the matriarch of her family, as she grew up in Jamaica. Her grandmother was a schoolteacher, and even out in the community people looked to her for answers, advice, and counsel.

Dr. Lindsay finished high school and immigrated to the U.S. with her mother. Perhaps to ease the transition from tropical Jamaica to New York City in December, she dived into her education and career aspirations in healthcare. Dr. Lindsay got her associate’s degree in nursing at Borough of Manhattan Community College, then her bachelor’s degree from St. Joseph’s College, and master’s degree from Herbert Lehman College in the Bronx.

As her career progressed, she saw many nurses she looked up to had master of business administration degrees. Dr. Lindsay enrolled at Hofstra University to complete her MBA, at the start seeing it as a capstone to her education, but by the end feeling she had unfinished business. Several of her professors recommended she pursue doctoral studies, and Dr. Lindsay found herself searching for a new program.

Through a recommendation from a colleague, Dr. Lindsay found ATSU, and she liked what she saw. She first set her concentration on global health studies, but later decided to expand her specializations – and course load – to include leadership and organizational behavior.

In truth, Dr. Lindsay said, she has no regrets about her decisions. She found ATSU-CGHS’ programs well structured and faculty members like her advisor, Kathleen Mathieson, PhD, CIP, incredibly helpful.

“Her feedback in the discussions is appropriate and thought provoking,” Dr. Lindsay said. “She guides you in the right direction and is always available to help.”

Dr. Mathieson has been so influential she’s turned Dr. Lindsay around on research, something which had initially deterred her from pursuing her doctorate but now sees as a key part of her future.

All her future holds remains to be seen, following a year like no other. Dr. Lindsay described the first days of New York’s coronavirus outbreak as a tsunami that struck overnight. Her hospital expanded its ICU capacity from about 50 to 150 beds, which still wasn’t enough to handle the patient load. By February 2021, the volume had decreased, but the kinds of cases were worse in many ways.

“They are just as sick or even sicker, and they are younger this time around,” Dr. Lindsay said in February, while describing the feelings that drove her to seek the vaccine so quickly.

“I’d never been afraid of anything in my career before now. I’m so afraid of getting it because you don’t know how it is going to affect you,” she said. “Some people live. Some people die. It affects males. It affects females. All different skin colors. Whether you have comorbidities or not. It’s so erratic and unpredictable. Long term, how will it affect me? Some people recover very quickly, some people have long-haul symptoms. I could not wait for the vaccine, and I feel a little bit more protected, a little safer, like a burden has been lifted off my shoulder.”

A short while after receiving the vaccine, Dr. Lindsay was contacted and asked to be a part of “Celebrating America,” a primetime national television broadcast on the night of President Joe Biden’s inauguration. In March, the Smithsonian’s National Museum of American History came calling to add her vaccination record card, scrubs, and hospital badge to its collection. Then in July, Dr. Lindsay traveled to the White House, where Biden presented her with the U.S. Citizenship and Immigration Services Outstanding Americans By Choice recognition.

“During the height of the pandemic, Sandra poured her heart and soul, working with patients and keeping her fellow nurses safe,” Biden said. “When the time came she became the first person in America to get fully vaccinated outside the trials. She can now hug her grandson. She’s out there making sure her patients and folks in the community get vaccinated.”

Dr. Lindsay has gratefully accepted her opportunities to represent front-line healthcare workers across the country and continues to try to change minds about the vaccine. It has worked, too, as Dr. Lindsay has received messages from children and adults, thanking her for her bravery and for inspiring them to get the vaccine.

“It is so important to get it,” Dr. Lindsay said. “Otherwise, we can’t move on.” 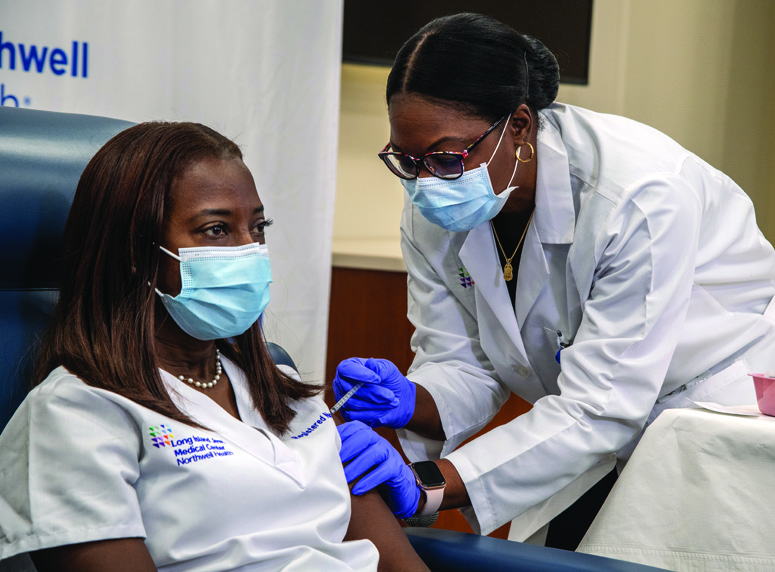