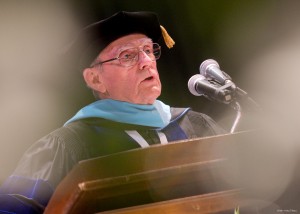 Dr. Tinning of Lansing, Michigan, served as president of KCOM from 1984-1996, and has 45 years of experience in educational administration, medical education and consulting, and rehabilitation counseling. Dr. Tinning received his PhD from Michigan State University in 1973.

To name just a few of his many honors, Dr. Tinning is a 2003 winner of the Kirksville Osteopathic Alumni Association Living Tribute Award for his outstanding service and achievements in the osteopathic field and in 2011, received the American Osteopathic Association’s Great Pioneers Award for his dedication and commitment to the growth of osteopathic medicine. ATSU-KCOM’s Tinning Education Center was named in his honor in 1994, two years before his retirement.

From 2006-07, he served as president of Pacific Northwest University of Health Sciences in Yakima, Washington, where he also holds the title of president emeritus.