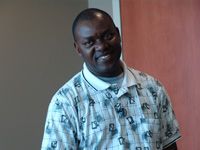 Peter Kankaka, PA, ’08, will tell you that he comes from a humble background. Perhaps that’s why he’s so humble about his unusual and inspiring academic journey, and his grand plans for giving back to his home in rural Africa.

Growing up on a farm in Kabaale, Uganda, Kankaka’s chores included getting the cows out to graze in the mornings before school and helping his family find clean water to drink. He recalls never wearing shoes until age 12. “I was raised in a very rural area, with people who have very little,” Kankaka says. “You have gardens, and you plant everything you eat. You don’t go to stores.”

He was fortunate, however, that his father was an educator who made school a priority. In his small community, his family was one of only a few whose parents could afford to send their children to school. He even earned his bachelor’s degree in Uganda.

As is the case for many immigrants, the American dream drew Kankaka to the West in 2000. Although he wanted to live in the United States, he could only get a visa to enter and live in Canada. On Sept. 8, 2001, after living in Canada for about a year, he flew to the United States to visit friends. It was just two days before the Sept. 11 terrorist attacks.

Despite the tragedy of that day, he calls himself lucky; the new and immediate

immigration laws meant that he was forced to remain in America, where he’d wanted to be all along.

He started out as a laboratory technician in Atlanta, Ga., and moved to Arizona shortly thereafter for a job at Payson Regional Medical Center in Payson, Ariz. He continued to dream of going to school to become a physician assistant and eventually applied and was accepted at ATSU-ASHS. He says he remembers getting the call from Bert Simon, D.H.Sc., offering him a spot in the 2008 PA class.

“It was the happiest day in my life,” he says.

But, as he says, reality kicked in. He didn’t have any money for tuition, and his visa was sponsored by Payson Regional Medical Center, which meant that he did not have the flexibility to move to Mesa permanently. For a full year, he had to continue working at the hospital 40 hours a week to maintain his visa and earn his green card – and work was 75 miles, or about an hour and a half, from ATSU-ASHS. And until he found a roommate in Mesa, he lived in his van in the school’s parking lot.

“During the interview, I was told I could not have a job because the PA program is so hard,” he says. “So I kept quiet. I knew my situation, and I didn’t have any other choice.”

In the three short months before classes started, Kankaka managed to turn a smart real estate deal into money for tuition. As for his job in Payson, the hospital was willing to allow him to put in his required hours during an intense weekend schedule.

For the second year, he had clinical rotations in Safford, Ariz., which meant another 200 miles tacked on to his drive. “It was hard,” he says. “I don’t know how I did it. The only thing that was driving me was that I wanted the program very much. I wanted it so badly that I was willing to push myself to my limits, and that’s what I did.”

Kankaka’s dedication deeply moved both the PA faculty and his fellow students. “Peter was a big part of the heart and soul of a remarkable class,” says Mike Goodwin, PA, chair of the physician assistant program. “He really brought the level of the class up both socially and educationally. He’s a remarkable young man.”

Kankaka was, and still is, motivated by his desire to eventually give back to his small community in rural Africa. He plans to use land left to him by his father and turn existing structures there into a medical clinic. He has tentatively recruited members of his PA class to visit his future clinic for rotations.

According to Kankaka, there is a dire need for quality healthcare in his and other Ugandan villages. Care is provided by ‘clinical officers,’ who have far less training than American healthcare providers. They are equipped mainly to provide basic care and teach about hygiene and disease prevention. The area does produce some physicians; however, most don’t stay because there is no money to be made in the villages.

For the time being, Kankaka must earn the money needed to start his clinic. “$500 can do a lot of things there,” he says. “It can take care of thousands of people. A few supplies that people can’t use in the U.S. will go a long way. I will stay here to earn money, and travel back and forth.”

His most recent trip home was in April 2009. He is also waiting patiently for his green card. Upon graduation, Kankaka took a position at Sage Memorial Hospital in Ganado, Ariz., on a Navajo Indian reservation, where he works today. The rural setting was inviting to Kankaka, as was the opportunity to “learn a lot, because I will get to do a little bit of everything.” He also still travels to Payson to work weekends.

“If the patients are there, I will be there,” he says. “Working many hours will not be a problem for me.”