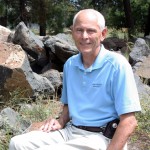 Jack Daniels, PhD, associate professor, Human Movement program, knows what it takes to train and win in the Olympics. Dr. Daniels is a former Olympian who competed in modern pentathlon at two Olympics (1956 in Melbourne, Australia; and 1960 in Rome) and three World Championships (Stockholm, Sweden, London, and Mexico City). He won the Silver Team Medal at Melbourne, Bronze Team Medal at Rome, and Bronze Team Medal at Mexico City. He was also twice a US National Champion.

“In my day, modern pentathlon involved 5,000-meter cross-country horseback ride over 28 obstacles, (riding a horse you selected by draw so a horse you had ever seen before), epee fencing, pistol shooting, swimming, and cross-country running,” said Dr. Daniels. “I was also the first foreign athlete to win the Swedish Pentathlon National Championship in more than 50 years.”

Since that time Dr. Daniels is passing on his expertise through teaching at ATSU and coaching other Olympic runners. “I have coached several Olympic runners,” says Dr. Daniels. “The best was Lisa Martin, an Australian who won the Silver Medal in the 1988 Olympic marathon race.  Dr. Daniels also coached Penny Werthner, Canadian Olympian in the 1,500-meter event.

Today, he is coach for runner Janet Cherobon-Bawcom who placed 12th in the women’s 10,000-meter race in the London 2012 Olympics. “I really enjoy coaching young athletes because they always improve so much at the early years, and that is encouraging for them and for me.”