Contestants shine during SparkTank on the Arizona campus 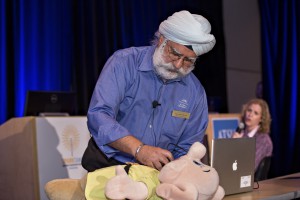 A.T. Still University’s (ATSU) Teaching & Learning Center held its second SparkTank event, a live show-style competition focused on teaching and learning on the Mesa, Arizona campus on Feb. 24. The event featured individual contestants and teams who pitched their ideas to a panel of judges for the opportunity to win $5,000 in project funding. Of the 19 proposals submitted, eight were selected to present in front of six judges and an audience comprised of more than 50 faculty, staff, and students.

Second-year osteopathic medical students Marvin Dang and Uday Gulati made the journey from Brooklyn, New York to present their project titled “ATSU’s Virtual Osteopathic Clinic.” They were awarded top honors and received $5,000 to fund their project. “When the both of us realized we wanted to address a major gap in our medical education, we immediately began putting together our proposal,” said Gulati. “It was not soon after that we heard about SparkTank that we knew this was the perfect opportunity to start turning our vision into reality. We want to utilize healthcare technology and gamification to increase opportunities for medical students to practice osteopathic manipulative medicine on patients in underserved areas. For us, the hard work has already begun and we are excited more than ever to see this program through.”

View all SparkTank winners and proposals, including those from the Kirksville event held on Nov. 18, 2015.

Teams had 10 minutes to present to a panel of judges.

Contestants shine during SparkTank on the Arizona campus