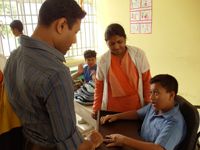 Language isn’t a barrier for Imrul Kabir – even when working with uncommunicative autistic children. In fact, Dr. Kabir knows seven different languages, all of which he commonly uses as an early intervention therapist working with immigrant families in New York City.

Dr. Kabir has lived a life rich with diversity. Born in Bangladesh and raised in many different countries (his father was a diplomat), Dr. Kabir grew to love language, geography, and culture, each helping him better relate to clients and giving him a heart for struggling children.

Like many in the United States, Dr. Kabir, who received his DPT from ASHS in 2010, noticed a rise in the incidence of children with Autism Spectrum Disorder in the last 10 years. He also encountered many with the condition while traveling in Bangladesh.

“I love every part of my work as a pediatric physical therapist,” says Dr. Kabir. “But I am most enamored with my work with the autistic population.”

Every summer, Dr. Kabir ventures back to Bangladesh where the Ministry of Social Welfare has estimated that one child in 500 has autism, meaning the approximate number of children with ASD is no less than 280,000. Additionally, 45 percent of its population lives below poverty, 53 percent over age 15 is illiterate, and 41 percent of children under age 5 suffer from malnourishment. Not to mention, the social barriers are considerably daunting.

“Autism is considered a God-given curse and children with ASD are taken as possessed by the devil,” Dr. Kabir says. “Bad parenting is also accused. Working mothers still get the blame.”

It’s a dire situation for children living in the poorest regions of Bangladesh. The public school system can only inadequately address the needs of disabled kids. That’s why Dr. Kabir has made it his personal mission to bring awareness to the cause.

With the help of colleagues, Dr. Kabir has conducted workshops and trainings, lectured at universities, and mentored therapists in Dhaka, the country’s capital city. Local media helped him air a live TV program spotlighting autism in which parents called in with questions from the most remote regions of Bangladesh.

“It is only recent that Bangladesh is learning about the condition, and sadly, very few institutes offer individualized programs for special children due to a lack of trained professionals and materials,” says Dr. Kabir. “My goal is to reach out and educate the people of Bangladesh.”

Autism itself presents many challenges for children, families, and communities. Combine that with a largely uneducated and resource-poor country, and the obstacles seem insurmountable.

Despite the circumstances, Dr. Kabir is ready – and willing – to break down the barriers.