ATSU rededicates Museum of Osteopathic Medicine to the osteopathic profession 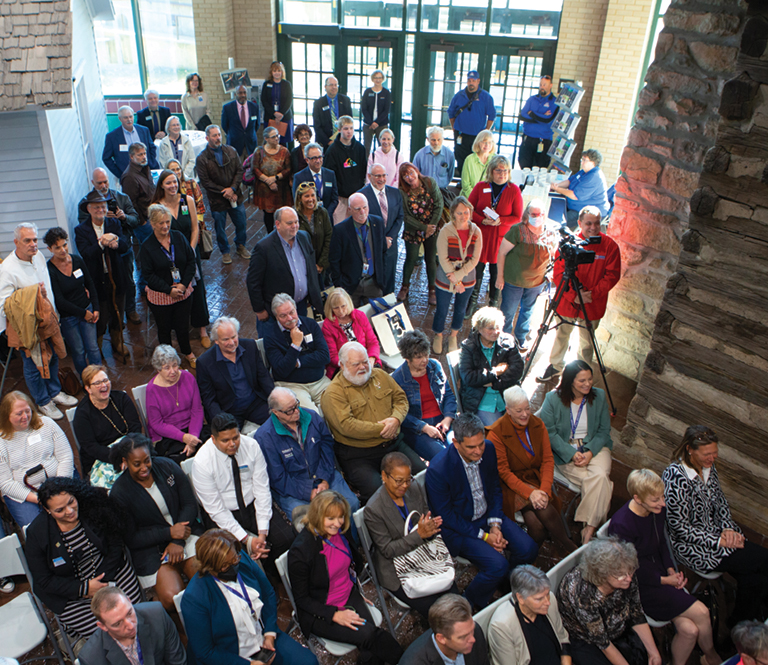 ATSU President Craig Phelps, DO, ’84, led the event by welcoming and introducing guests and announcing the beginning of a yearlong celebration of the museum’s accreditation by the American
Alliance of Museums and rededication to the osteopathic profession. He also acknowledged the museum staff for their tireless work and attention to detail.

“As the repository, recorder, and living memory of the osteopathic movement, the Museum of Osteopathic Medicine is charged with collecting, preserving, researching, and interpreting the story of osteopathic medicine,” Dr. Phelps said. “After several years of researching and cataloging items, study and preparation, this summer, ATSU received notification from the American Alliance of Museums that the Museum of Osteopathic Medicine was accredited.”

ATSU-KCOM Dean Margaret Wilson, DO, ’82, also recognized local and national guests and acknowledged the efforts of museum staff. The Museum of Osteopathic Medicine, she said, is a gem for the College and the osteopathic profession.

“I’m a proud native of Kirksville,” Dr. Wilson said. “What grew out of Dr. Still’s beginnings here has become an incredible profession that we all can be so proud of.”

Among the national osteopathic leaders in attendance, Kevin Klauer, DO, EJD, CEO of the American Osteopathic Association, addressed the audience and thanked ATSU for the opportunity to participate in the museum’s celebration. He congratulated the museum on its national achievement and expressed gratitude for the museum’s efforts in preserving the osteopathic profession’s heritage.

“We enjoy the opportunity to serve the osteopathic profession, 178,000 osteopathic physicians and medical students and growing, and we couldn’t do that without the support and the effort that all of you have taken to preserve our heritage,” Dr. Klauer said. “Without preserving our heritage, without making sure people don’t forget where we came from, so that we can remind them of where we’re going to be and how important we are in the healthcare community, we would not be nearly as strong or as effective. That starts here where everything began.”

In addition, Dr. Klauer gave a personal thank you to Museum of Osteopathic Medicine Director Jason Haxton, MA, calling him a champion for osteopathic history.

ATSU Board of Trustees Chair Herb Kuhn delivered remarks on behalf of the board. He congratulated all who contributed to the museum’s accreditation efforts and acknowledged the significance of this milestone.

“This museum has created a powerful understanding and appreciation of the profession of osteopathic medicine,” Kuhn said. “This new status, this accreditation status, is going to continue to allow us to preserve and display the important artifacts of this profession.”

Then, Dr. Phelps introduced Haxton to the audience and shared details of his background and museum work. Haxton, who has served as director of the museum since 2000, gave a brief history of the museum’s beginnings and evolution.

“One hundred thirty years ago, a man with an idea for better healthcare for each individual started teaching a new way of medicine,” Haxton said. “Then he passed in 1917, and about 17 years later, his daughter, Blanche, not wanting us to forget what he had done, put two little curio cabinets of some of his
personal artifacts in the Administration Building. That was our beginning.”

Today, with more than 100,000 objects, photographs, documents, and books making up its collections, the Museum of Osteopathic Medicine continues to grow while preserving history for future generations. One example of that growth was a recent major gift made by Elsie Gaber, PhD, former assistant
vice president for university relations and associate dean for the School for Health Management (now ATSU-CGHS), and Ron Gaber, DHL, dean emeritus of students and vice president emeritus of student affairs.

During the museum ceremony, ATSU Vice President of University Advancement Shaun Sommerer, PhD, announced the Gabers’ gift and formally dedicated the historic medicinal garden as Elsie’s Medicinal Garden. Their gift, which is preserved in an endowment to support the museum in perpetuity, was made in support of the museum’s mission to preserve and promote the tenets of osteopathy, with the deep
understanding of the museum’s humble beginnings and the importance it holds for the osteopathic profession today and for its future, and with respect for the unfailing dedication of the museum staff. It was also made to demonstrate the couple’s thankfulness to the University and to support the outstanding
accreditation work of Haxton and his staff. As a memento of the occasion, the Gabers were honored with a framed photo of themselves standing together in the medical garden.

The ceremony concluded with Kirksville Mayor Zac Burden offering a proclamation for the official city record. He read the proclamation in full to the audience, recognizing and celebrating ATSU and the Museum of Osteopathic Medicine for the accreditation honor from the American Alliance of Museums.

“The future is very bright,” Dr. Phelps said in his closing remarks, noting the growth of osteopathic medical education. “We need to make sure all students in all the schools understand the uniqueness of osteopathic medicine and why it is so special. We want to connect future generations to the profession and work of Dr. Still.”

Learn about the Honor Wall at the Museum of Osteopathic Medicine that will be unveiled during Founder’s Day 2023.

ATSU rededicates Museum of Osteopathic Medicine to the osteopathic profession