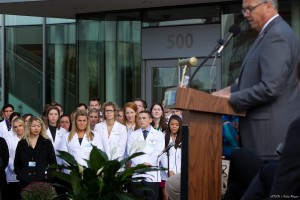 A.T. Still University (ATSU) celebrated a milestone for the University and the Kirksville, Mo., community on Oct. 24, 2013 with an Inauguration Ceremony for the Missouri School of Dentistry & Oral Health (MOSDOH). The ceremony was held in front of the new Interprofessional Education (IPE) Building.

Craig Phelps, DO, ’84, president, spoke at the event along with G. Scott Drew, DO, FAOCD, ’87, chair, ATSU Board of Trustees. The blessing was given by George Blue Spruce, DDS, assistant dean for American Indian Affairs, ATSU-Arizona School of Dentistry & Oral Health. Christopher Halliday, DDS, MPH, inaugural dean, ATSU-MOSDOH spoke of the school’s mission and vision for closing the gap on Missouri’s need for oral healthcare. The MEDleys student organization performed two songs.

Tours of the new IPE Building were available to the public, as well as the unveiling of the newly named Jack and Sue Magruder Lobby. Jack Magruder, president emeritus, and Sue Magruder, first lady emerita, were instrumental in bringing the new dental school to Kirksville.

Commemorative coins and ATSU toothbrushes were passed out to all of the guests.