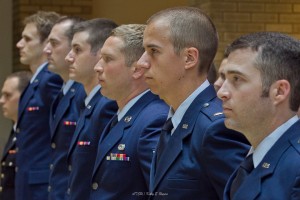 Students,  faculty, staff, and community members gathered in the Centennial Commons on Sept. 11, 2013, for a remembrance ceremony to honor those who lost their lives 12 years ago on Sept. 11, 2001.

The colors were presented by Truman State University ROTC cadets.

ATSU-KCOM faculty members Andrew Lovy, DO, adjunct professor, and David Todd, DO, assistant professor, Department of Osteopathic Manipulative Medicine, were recognized for their service, along with others who have served in the U.S. military or public service.