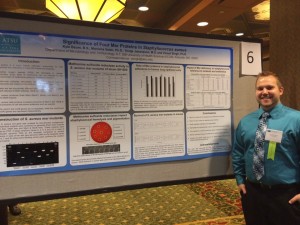 A group of 14 A.T. Still University-Kirksville College of Osteopathic Medicine (ATSU-KCOM) students, residents, and fellows submitted abstracts regarding their research projects to conference organizers. All applicants were accepted to present posters highlighting their research projects. To facilitate ATSU-KCOM scholars being able to attend the symposium and present their work, Margaret Wilson, DO, ’82, dean, offered MOAC scholarships of up to $500 per attendee.

Posters were judged by a panel of MAOPS members and winners were announced at the MAOPS/AMAOPS Joint Luncheon May 3, 2014.

The following individuals associated with ATSU-KCOM were recognized.