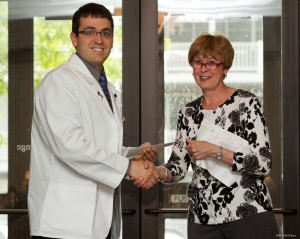 First- and second-year osteopathic medical students at A.T. Still University’s Kirksville College of Osteopathic Medicine were presented endowment and association awards on May 12, 2014 in the Casner Alumni Lounge. The awards were presented by Margaret Wilson, DO, ’82, dean.