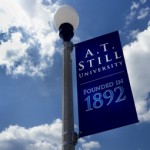 A.T. Still University’s Kirksville College of Medicine students have been honored for going above and beyond when it comes to community service.

Students were recognized by the Council of Osteopathic Student Government Presidents for participating in the Translating Osteopathic Understanding into Community Health (TOUCH) program.

In order to receive this distinction, students must complete a minimum of community service outside any requirements from the school.