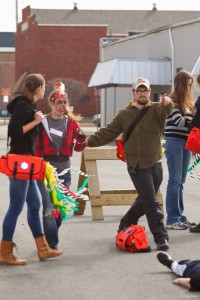 Community volunteers played the role of patients and bystanders in the disaster scenario, and were made up by Hollywood moulage artists.  ATSU-KCOM partnered with public service agencies to help the community with disaster preparedness, as well as train medical students and first responders. Decontamination and hazmat drills were also part of the event.