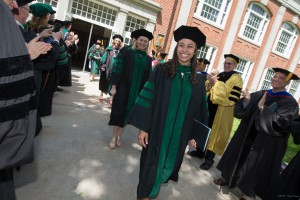 A.T. Still University’s Kirksville College of Osteopathic Medicine (ATSU-KCOM) celebrated a new class of osteopathic physicians on May 14, 2016. This class represents ATSU-KCOM’s 180th graduating class. Suzanne Steinbaum-Levine, DO, ’94, served as the commencement speaker for the ceremony. Dr. Steinbaum currently serves as Director for Women and Heart Health at The Heart and Vascular Institute at Lenox Hill Hospital in New York. She is a Fellow for epidemiology and prevention with the American Heart Association and serves on the association’s Board of Directors. Dr. Steinbaum is also a national spokesperson for the American Heart Association and its Go Red for Women movement. She serves as chair for the New York City Go Red Luncheon and as an editor for WebMD. A staunch advocate for heart health, Dr. Steinbaum frequently presents and publishes on women’s health and cardiology-related topics. Her professional memberships include the American College of Preventative Cardiologist, National Lipid Association, American College of Cardiology, and American Osteopathic Association. She was recognized for her work in 2015 by New York magazine, Castle Connolly, and The New York Times. Dr. Steinbaum was also the recipient of the doctor of osteopathic education honorary degree. 2016 class stats 167 graduates receiving a doctor of osteopathic medicine degree 74 females 93 males 30 states represented Average age: 29 12 graduates receiving a master of biomedical sciences degree