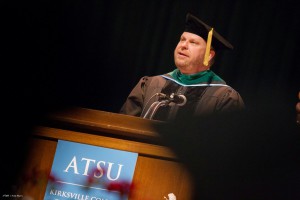 A.T. Still University’s-Kirksville College of Osteopathic Medicine (ATSU-KCOM) commemorated a new class of osteopathic physicians on May 16, 2015. The class of 2015 is ATSU-KCOM’s 179th graduating class.

Dr. Pressley also served as a White House physician and provided executive health protection in direct support of the president of the United States and the president’s senior executive staff. He received his degree in osteopathic medicine from ATSU-KCOM and earned his master of public health at ATSU’s College of Graduate Health Studies.

Richard J. Cenedella, PhD, was the recipient of a doctor of osteopathic education honorary degree. The commencement ceremony was held in Baldwin Hall on the Truman State University campus.