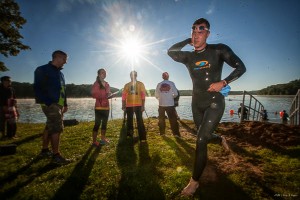 More than 150 athletes participated in the 30th annual NEMO Triathlon on Sept. 7 at Thousand Hills State Park in Kirksville, Mo.  The race consisted of a .75-mile swim, 18-mile bike ride, and then a five-mile run.

Athletes of all different fitness levels participated. Ages of the participants ranged from 14 to 79-years-old.. The overall winner for the males was John Venner, who had a time of 1:42:10. For the females, Leslie Curley placed first with a time of 1:54:10. For Curley, this marks the sixth time she has won the race.

Approximately 200 volunteers helped set up and organize the race with a majority of them being ATSU students and staff. ATSU staff member and NEMO Triathlon Race Director Dan Martin said this year provided some of the best competition and weather for the event.