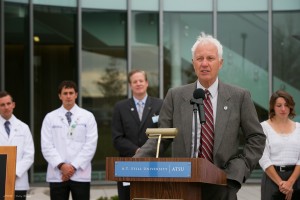 A.T. Still University (ATSU) held it’s Day of Compassion ceremony outside the Interprofessional Education Building (IPE). This year marks the 10th Anniversary of the tragedy. Staff, faculty, students, community members, and distinguished guests were on hand to honor the 13 lives lost on Oct. 19, 2004 due to the crash of Flight 5966. The passengers of that flight were on their way from St. Louis, Mo. to Kirksville, Mo. for a conference focused on developing a compassionate campus.

The only two survivors of the plane crash were in attendance. John Krogh, PhD, and Wendy Bonham. Dr. Krogh, a former faculty member of ATSU, spoke during the ceremony to share his thoughts and deepest sympathies not only for the lives lost that day, but for the families and friends of those lost as well. Dr. Krogh also spoke about the importance of compassion and humanism, and how integral both are to the mission of ATSU.

ATSU President, Craig Phelps, DO, ’84, FAOASM, was also on hand to speak, along with ATSU Board of Trustees Chair G. Scott Drew, DO, ’87, and University Student Association Vice President, Addison Roberts, OMS III.

The emergency responders for Flight 5966 presented a Wreath of Remembrance honoring those lives lost that day.

In addition, the flag pole in front of the IPE Building was dedicated as a symbol of the University’s strength and resolve to educate compassionate, humanistic healthcare professionals who will treat patients within communities spanning the globe.