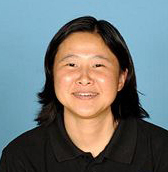 Nina Hsieh, MS, ATC, CSCS, CES, ‘03, is transitioning into her new role as the Assistant Athletic Trainer with the Los Angeles Lakers beginning in the 2016-17 season. After graduating from California State University, Fullerton with a degree in kinesiology in 2000, Hsieh interned at NASA, focusing on the rehabilitation of astronauts and staff members at the Kennedy Space Center. She then pursued her master’s degree in sports health care from the A.T. Still University Arizona School of Health Sciences (ATSU-ASHS), where she graduated in 2003. While studying at ATSU-ASHS, Hsieh served as the Assistant Athletic Trainer at Central Arizona College (2001-02), Assistant Athletic Trainer at Central Arizona College Phoenix College (2002-03). Following graduation from ATSU-ASHS, Hsieh spent the 2003-04 season as the Co-Head Athletic Trainer at Phoenix College. She was the Athletic Trainer for University of California, Santa Barbara (UCSB) women’s basketball team from 2004-08 before joining the Los Angeles D-Fenders, the Los Angeles Lakers’ NBA D-League affiliate in 2008. In her role with the D-Fenders, Hsieh oversaw all aspects of player health, including strength and conditioning, in addition to handling the team’s equipment and assisting with team travel. Concurrently, she worked as Athletic Trainer for the UCSB men’s soccer team during the 2010-11 season. Heish has also joined the Lakers for both Summer League in Las Vegas and training camp each of the last four seasons (2012-14).

Hsieh is a NATA Board Certified Athletic Trainer, NSCA Certified Strength and Conditioning Specialist, and holds a Corrective Exercise Specialist certification from the NASM. She has volunteered for both FWATA and NATA conventions.

A native of Taiwan, she currently resides in Lakewood, CA. Hsieh enjoys spending time with family and friends. Her passion lies in traveling and experiencing new foods around the world.