The Missouri Department of Conservation and A.T. Still University have partnered to determine locations of tick species, and the pathogens they may harbor, across Missouri. We need your help. We are asking the citizens of Missouri to send us ticks so we can identify and test them for bacterial pathogens.

There is a pressing need to increase tick surveillance in Missouri. The state has a diverse and abundant tick community that is poorly understood, and new human pathogens transmitted by the ticks are being discovered. There are many tick-borne human pathogens in the state of Missouri and yet there is no comprehensive map of where tick species occur, or of the human pathogens those ticks are carrying.

Citizen science is when members of the public collaborate with scientists to collect data and samples and become active participants in scientific study. Citizen science has been demonstrated as an effective technique to accomplish data collection and disease ecology surveillance at a scale unattainable by scientists alone. We will need the help of many citizen scientists to map the distributions of ticks in a place the size of Missouri.

We will begin the study in April 2021 and conclude in September 2022. Distribution maps on the website will be updated on a weekly basis as ticks are being submitted so that the citizens of Missouri can actively follow the progress of the study.

We would like to acknowledge Dr. Nathan Nieto and the Bay Area Lyme Foundation for serving as a template for this current study.

Please understand that this is a research study and not a diagnostic service intended for use in making clinical decisions.

Can I get the results from my ticks’ pathogen screen?

No. We currently don’t have the personnel necessary to reply to all contributors. Please remember that these testing services can’t be used for clinical or diagnostic decisions. It will take us a while to process the samples and obtain the results.

What types of ticks do you want?

We desire all species of ticks as long as they are collected in Missouri. They can be found in your yard, the woods, on an animal, or on you. Ideal participants in this study are individuals that spend a significant amount of time outdoors during work or recreation that encounter large numbers of ticks through their activities. The accuracy of our study improves as we receive more ticks from a given area.

Can I send you ticks that are dead?

Living/viable ticks are preferred, but yes we can screen dead ticks if they survive shipping without disintegrating.

Can I place more than one tick in a bag?

Can I submit ticks that have either fed on or were attached to an animal or human?

Yes, but please indicate this clearly on the form. Ticks that have previously fed on humans must be handled more carefully in the lab due to exposure to human blood products.

Can I send ticks off my animal if it has been treated with flea/tick control product?

Yes, but please include this information on the submission form.

Can I submit ticks that are stuck to tape or a lint roller?

This is not preferred, but we can work with ticks stuck to some types of tape/adhesive paper. When the ticks are stuck to an adhesive material, they are difficult to remove and it takes much longer to collect and sort them. If a tick is compromised during extrication comes apart while removing from the tape, it can’t be accurately identified and must be discarded. In addition, ticks immobilized on adhesive have a shorter survival time. If you have to use tape, painters’ masking tape is best because it has lower adhesive properties. Don’t use duct tape. Ticks can rarely be removed from duct tape intact.

How long will you accept ticks?

We will continue to accept ticks through summer 2022. 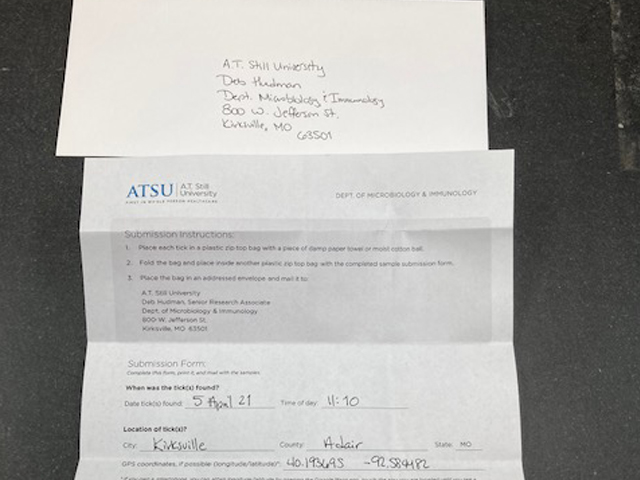 Step 1:
Download, print, and fill out a submission form and address an envelope. 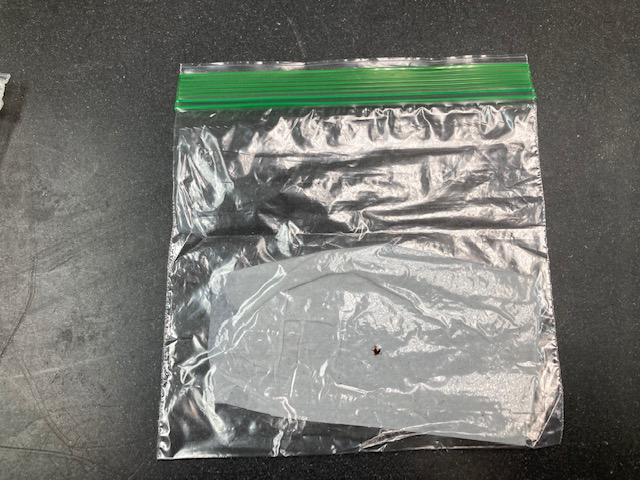 Place each tick sample into a plastic zip top bag with a piece of damp paper towel. 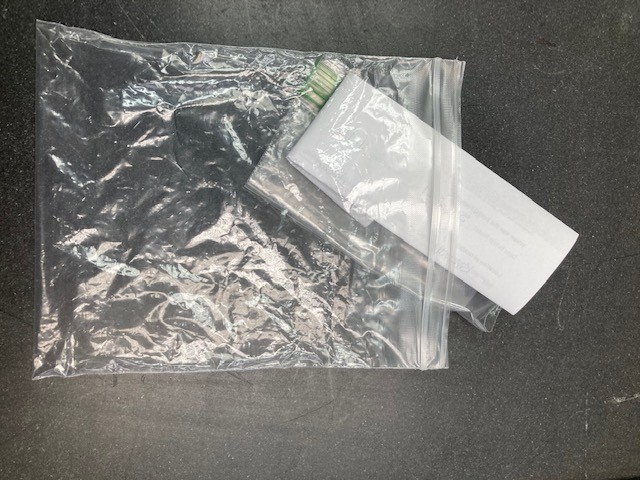 Step 3:
Fold the bag containing the tick sample and place inside another plastic zip top bag with the completed sample submission form. 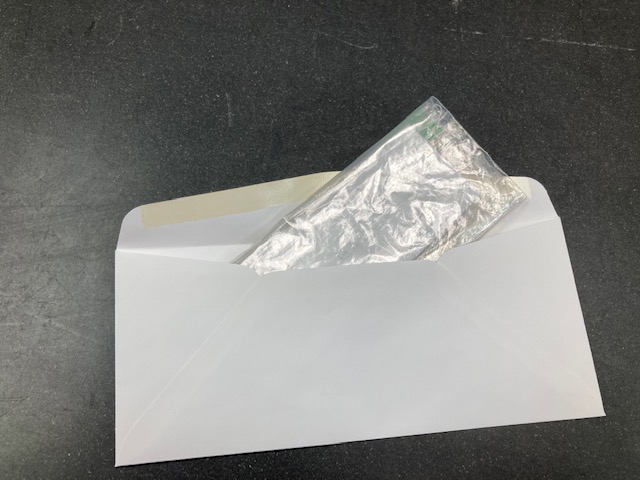 Step 4:
Place this bag into the addressed envelope and mail.

By sending you this tick, I release the A.T. Still University, the Department of Microbiology & Immunology, and their staff and employees of any liability with regards to the outcome of testing or any findings in perpetuity. The laboratory of Deb Hudman at the A.T. Still University will identify and test the tick(s) I submit for the presence of DNA associated with disease-causing pathogens. These tests are not intended to provide clinical diagnosis of disease and they should not be interpreted as a substitute for clinical testing or consultation with a physician.

Results from my submissions will be used to determine the presence of tick species and their pathogens by county for the state of Missouri. Accordingly, this information will be shared with the public and health agencies that may request it. The shared data is completely anonymous.

We want to give thanks to some of our unsung heroes. Maybe it’s just us but we find these hilarious or at least Deb does!

Here is how we are testing each county. We choose ten adult ticks of one species. We selected ten ticks that provide a wide distribution within the county. For example, here is a Google map of Franklin County. The location of each balloon represents one adult lone star tick submitted to us. We isolated the DNA from those ten ticks and performed separate PCR reactions for four different bacterial species. In some cases, we report eight or nine ticks for an individual county.  That is because we did not attain enough DNA to move forward for all of the PCR reactions. We will go back to those counties and test more ticks to bring it up to a minimum of ten adults per species. 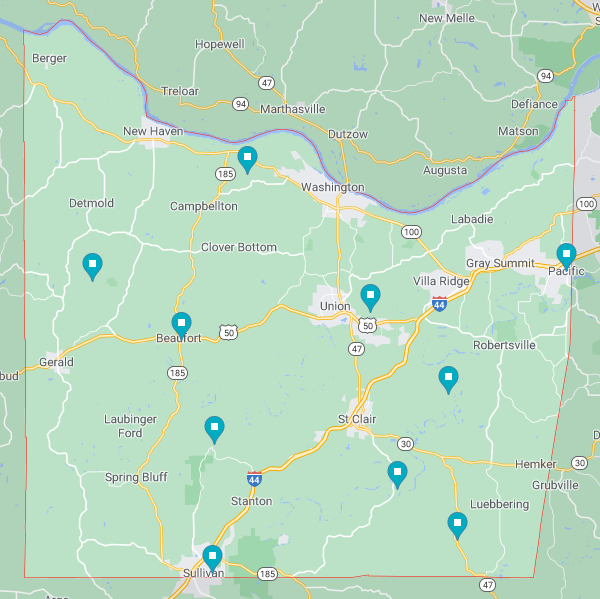 We also had positives for Rickettsia species but none of the positives were the bug that causes Rocky Mountain spotted fever.

Next week we will be testing Christian and Cole Counties.

We will eventually have the pathogen data linked to the map but until we can get all of the kinks worked out, we will start reporting some of the data here.

We also had positives for Rickettsia species but none of the positives were the bug that causes Rocky Mountain spotted fever.

We are currently testing Montgomery and St. Louis Counties this week.

We have surpassed 10,000 ticks being submitted to this research project! Thank you so much. For those of you around the Portland Missouri area I will be giving a talk along with others on Saturday September 11th. Please check out the flyer and come join us with your questions. Hope to see you there. 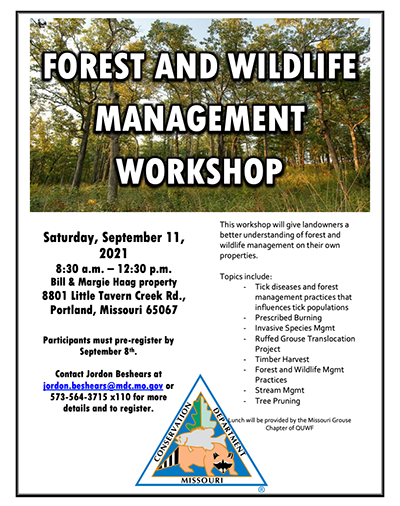 We had a very exciting submission from St. Louis City, our first soft tick. We believe it is a bat tick but as we are not experienced in identifying soft ticks so we have sent off some images to the U.S. National Tick Collection in hopes of confirming our identification. As you will see from the images, soft ticks are very different in appearance from hard ticks. When looking at the dorsal side (back of tick) it appears there are no feeding parts or what people typically call the head of the tick. From the ventral side (belly of tick) you can see the mouth parts. Soft ticks do not have a scutum or a “shield” like the hard ticks that is why they appear wrinkly and dimpled. Soft ticks tend to hang out in animal nests, burrows, or roosts and do not quest like hard ticks. Soft ticks will occasionally bite humans and pet animals when their primary hosts are unavailable.

Most ticks people encounter are hard ticks. For instance, we have received over 9,800 ticks so far and only one has been a soft tick! 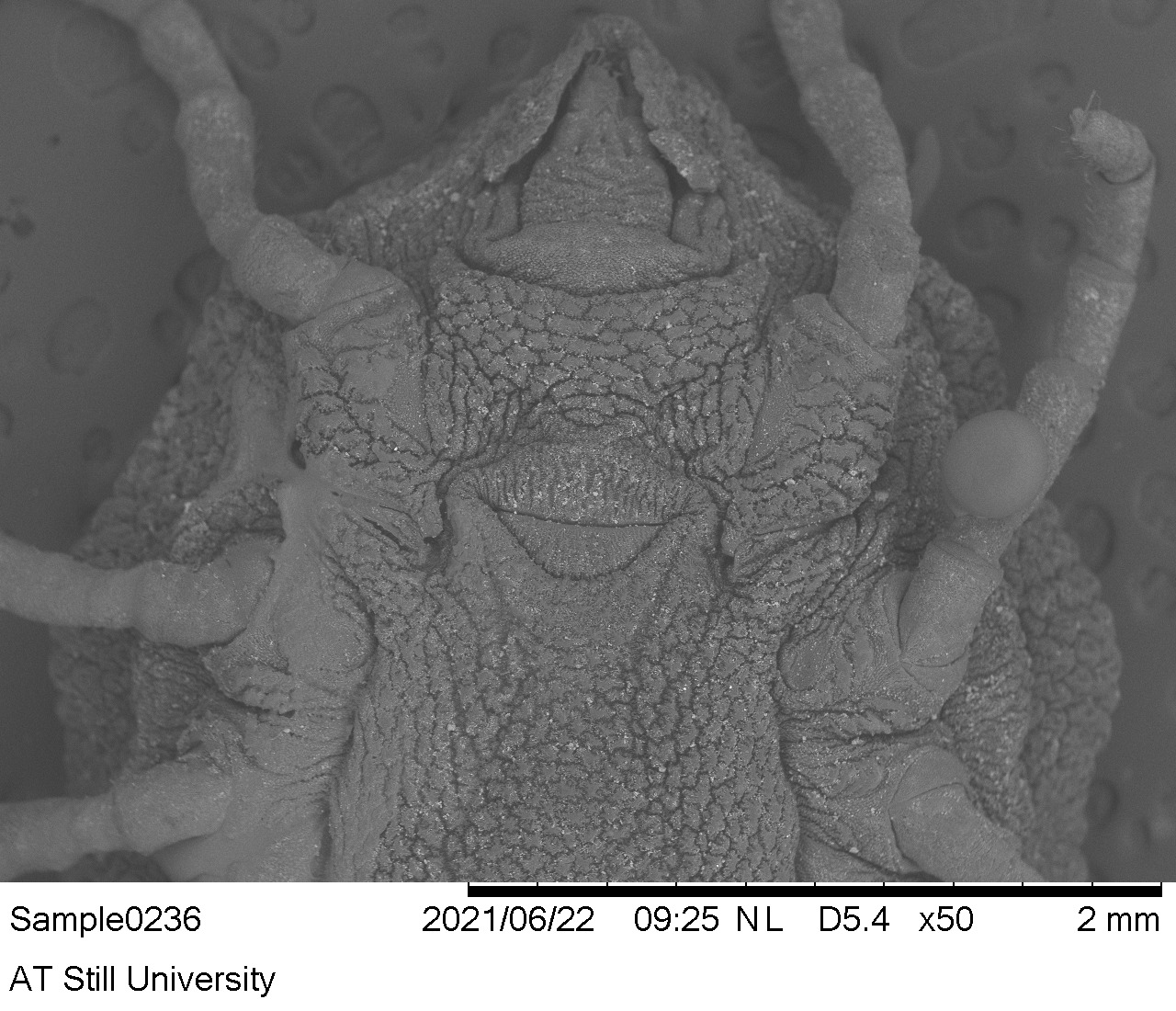 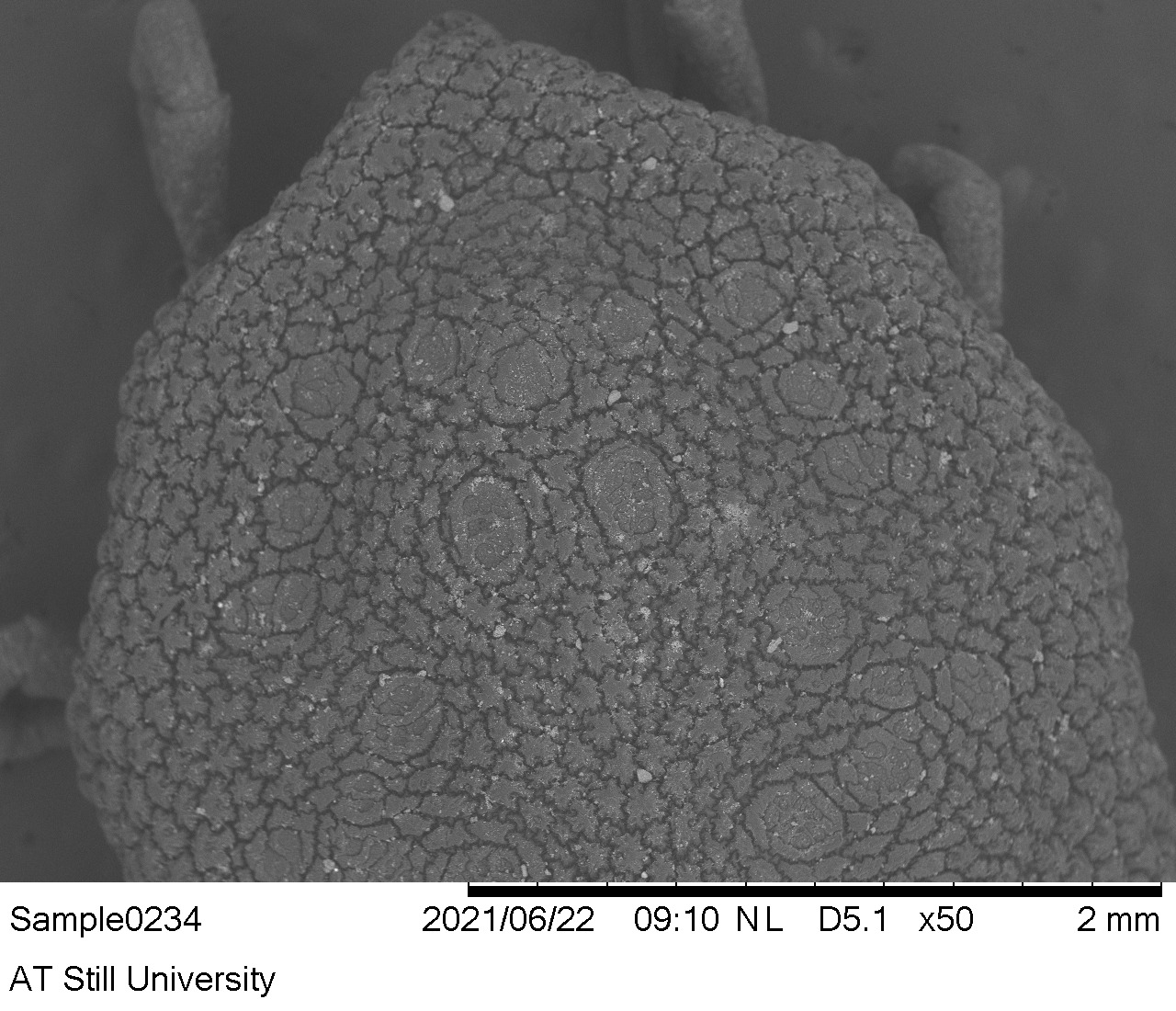 Don’t become prey to ticks, instead, become a tick predator! Nymphs (seed ticks) are out in full swing. Please look for ticks after spending time outside. If you find one, keep looking, there will be two more.

We want to give thanks to some of our unsung heroes. We appreciate the drawings, stories, and puns that are submitted along with the ticks. We are posting a few to share. It always puts a smile on our faces. In addition, we want to thank the Daughters of the American Revolution Montgomery Chapter for selecting this research as their Conservation project. 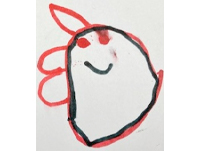 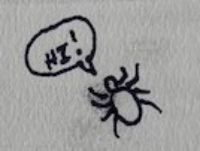 The tick lab has hired a new staff member, Nate Linker, to provide additional help this summer. We are hoping this will free up time to begin the pathogen testing. 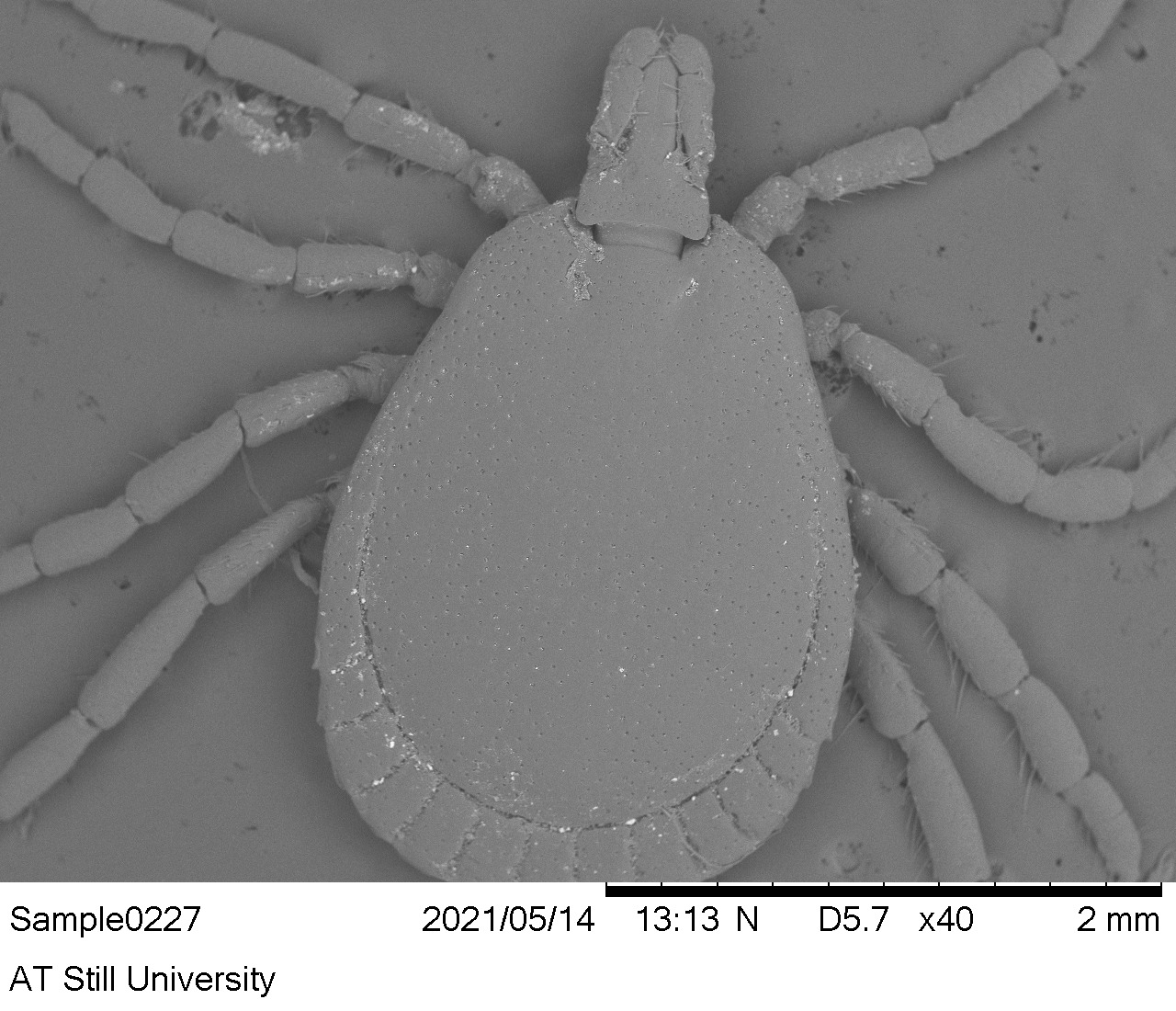 To date, we have received more than 6,300 ticks!!! We have received at least one tick from every county except for New Madrid. If you know of anyone in New Madrid, please let them know about this project.

We will identify and count all species received but will only be testing a subset of those for human pathogens dependent upon the number of samples received for each county. We will be testing for Borrelia spp. (think Lyme and STARI), Ehrlichia spp. (ehrlichiosis) Francisella spp. (tularemia), and Rickettsia spp. (Rocky Mountain spotted fever). We want to make sure that we test a subset of all species from every county that we receive, so the testing will take some time.

If you are interested in what ticks have been submitted by county, please go to the tab called “maps”. You can click on that tab and you should see the state of MO. At that point, you can click on the county of interest, and it will report how many ticks we have found and what species. This map gets updated on a weekly basis. Once we begin pathogen testing that data will also be available in the map tab.

The easiest way we have found to view the data from the map tab is at the bottom center of the map box there is a small arrow pointing up. If you click on that, it will show the information in a spreadsheet format instead of a list. You can then either scan down to find your county or click on the county in the map itself.

Thank you, Missourians. Your efforts and contributions are most appreciated!