Educating the community about Osteopathic medicine

Medical education has not changed much in the past few decades, even in light of tremendous advances in medicine, learning theory and cognitive behavior. Research has proven the profound connectivity health issue in the body, which we address through the osteopathic tenets of whole person healthcare.

There is also strong evidence that students learn best when material is presented in context and then immediately applied. SOMA has incorporated this knowledge and developed an innovative curriculum to optimize student learning. Using a unique “1+3” model, the first year spent in didactic learning, and the next three spent gaining hands-on experience in community health centers. This is markedly different from many medical schools that offer a “2+2” format.

Ultimately, we know the delivery of healthcare must improve, particularly to traditionally underserved communities. As the only medical school in the country with a partnership with the National Association of Community Health Centers, SOMA is helping to lead the way.

Osteopathic medicine is a rapidly growing field, however many people are unaware of osteopathic medicine to this day. We set out to determine the level of awareness, spread osteopathy as an easy and medication free way to to treat their everyday ailments. knowledge, and educate people on the availability of

A survey was administered to attendees of a Pima community health fair to assess their prior knowledge of osteopathic medicine, manipulative medicine, their current pain level, presence of chronic disease, frequency of doctors visits, as well as likelihood to seek osteopathic treatment in the future after visiting our booth. The survey was anonymous, bilingual and administered on paper immediately after the person had attended our booth. We compiled this data to hopefully show an improvement in awareness and attitude towards osteopathy as well as an understanding by participants that there are other ways to relieve pain that don’t rely on medication. Participants were then shown an Osteopathic technique they could use at home for a particular ailment or problem that they were dealing with as well as given a premade pamphlet of easy to use techniques.

Osteopathic medicine is a rapidly growing field, however many people are unaware of osteopathic medicine to this day. We set out to determine the level of awareness, spread osteopathy as an easy and medication free way to to treat their everyday ailments. knowledge, and educate people on the availability of

However, only 33 out 50 people had sought care from a DO physician (Graph 2).

In our survey, when we asked “what do you think DO is”, we received answers from “never heard of it” to “DO is not just bunch of pills but rather more tuned in with nature”. One of the main purposes of our project was to perform a live osteopathic manipulative technique on one of our group members and explain the medical reason behind it. According to the survey, our subjects had been diagnosed with chronic conditions such as HTN, DM, arthritis, frequent HA and cancer survival.

After explaining to them what osteopathic medical field is and handing out pamphlets of OPP techniques, we performed those techniques on each other so that the subjects would have a better understanding after seeing a technique performed in person. Finally, after asking each subject if they would like to visit a DO in the near future, more than 50% decided to consider it where as 25% absolutely agreed to see one (Graph 3).

Although we were able to gather valuable data, there were still some limitations to our study. Our study was conducted at a health fair at the local community college in Tucson. Therefore, our demographic was of a specific socioeconomic range as well as educational level in that it was primarily made up of college students and faculty of the college. In addition, because it was a health fair, the studied population consisted of people with an existing knowledge and interest in health and well being. Therefore, there was a certain amount of selection bias at play. Lastly, although we were able to gauge the public’s pre-existing knowledge of osteopathic medicine, our data is not necessarily representative of the public’s awareness throughout the country. Arizona has two osteopathic medical schools, compared to some states that don’t have any, and even comparing other countries that don’t have any at all. Therefore, if this study was conducted in another state that doesn’t have a DO school or a state with a high percentage of immigrants, the base level of the public’s knowledge of osteopathy may be even lower.

We found all of the people we spoke to be very interested in osteopathic medicine whether or not they had previously heard of osteopathic medicine before. Most people were eager to learn more and be taught easy techniques to take home and use on their chronic illnesses as an alternate to extensive medication. Since our study did not produce hard data to run significant statistics on, this serves as more of a preliminary study to guide future studies and education on osteopathy. 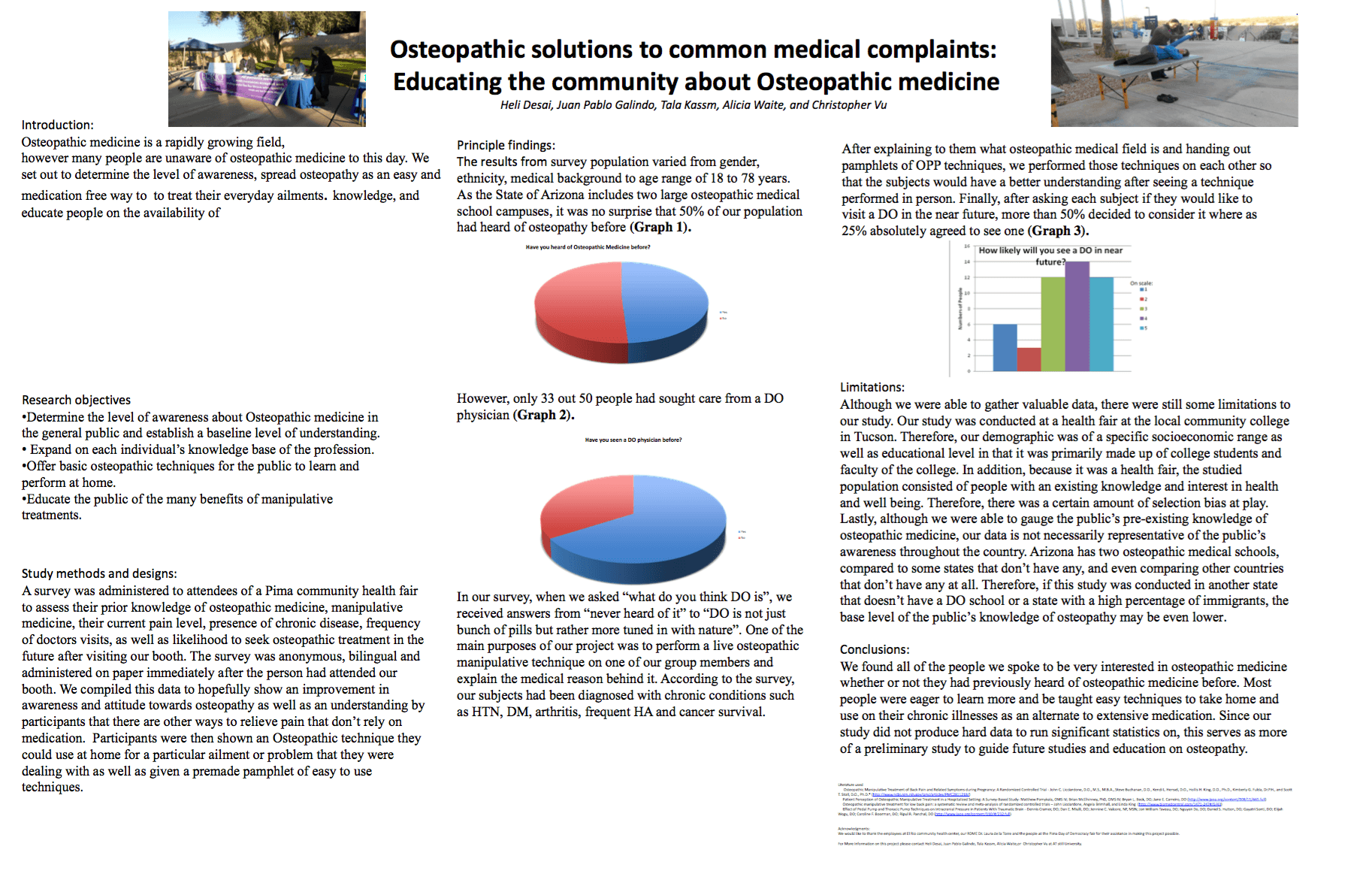 To evaluate the effect of a community health center based sodium intake reduction intervention on patient systolic and diastolic blood pressure.

Examine the correlation between obesity and Vitamin D deficiency

The purpose of this study is to determine if there was a correlation between obesity and vitamin D deficiency in the Hispanic pediatric population in Sunset Park, NY...