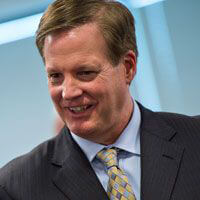 Since joining the ATSU family more than 30 years ago, I am proud to have witnessed my alma mater transform from the founding school of osteopathic medicine, established in 1892, to a leading health sciences university that today spans two campuses and online. This growth is a testament to the University’s commitment not only to our osteopathic heritage, but also to educating our students to become tomorrow’s healthcare leaders.

Supporting ATSU’s legacy is an inclusive campus community that is student-centered and service-focused. Our dedicated faculty and staff, along with supportive alumni, ensure students are actively engaged in their studies and have the resources, knowledge, and experience necessary to succeed. Innovative programs and state-of-the-art technology optimize learning and keep our students current with trends in healthcare. Furthermore, the University fosters an environment that values differences, encourages collaboration, and promotes a well-rounded and healthy lifestyle.

Please explore our website to learn more about ATSU and how we are preparing our students to become the next generation of healthcare leaders and professionals.