SOMA students realize that the school is the right place for them almost immediately. As a part of A.T. Still University, SOMA students become members of a community with a rich history of whole-person healthcare, focusing on the influence of body structure on function, on the body’s innate ability to heal itself, and on the connection between the body, mind, and spirit.

Core to the school’s culture is a mission to service. After the first year of didactic classroom learning, students spend the next three years gaining hands-on experience in community health centers, providing affordable care to those in need. This mission to serve is at the heart of the SOMA experience.

If you want to participate in the most unique and innovative medical school program in the country, while making a difference on the forefront of whole-person healthcare, then SOMA is the right choice for you.

Research design involved a retrospective cohort study of established care patients from two ERCHC sites who had missed appointments from February 24- March 7, 2014. Patients were called from ERCHC phone lines within two weeks of their missed appointment. The data collection was obtained through a series of standardized questions including the following categories: gender, language, insurance, and the reason for missing the appointment. By quantifying and differentiating the patient profiles, data was collected in the form of a sample survey in which a small selection of the ERCHC patients was contacted to allow for better monitoring and quality control.

Life commitments, forgotten appointments, and “no appointment” were key reasons for missed appointments. 45% of subjects either forgot or did not think they had an appointment, indicating a need to implement a reliable reminder system. Future research could determine the type of system that works best overall and which type has a greater impact on missed appointments for the Spanish speaking population, as they were more likely to report forgotten appointment. Results and recommendations will be presented to ERCHC administration. While this study was limited to 2 ERCHC sites, future research can include more locations to obtain more generalizable results.

Limitations of our research include the scale and distribution of our sites since only two of eleven ERCHC sites were selected for data collection. Patient access to a telephone and timing of the phone call impacted who could be called. Survey design compartmentalized the patients and left little room to report reasons other than what the design team considered to be reasons people might miss their appointments. Finally, it was not in our capacity to survey patients who spoke languages other than English and Spanish who also use ERCHC services. 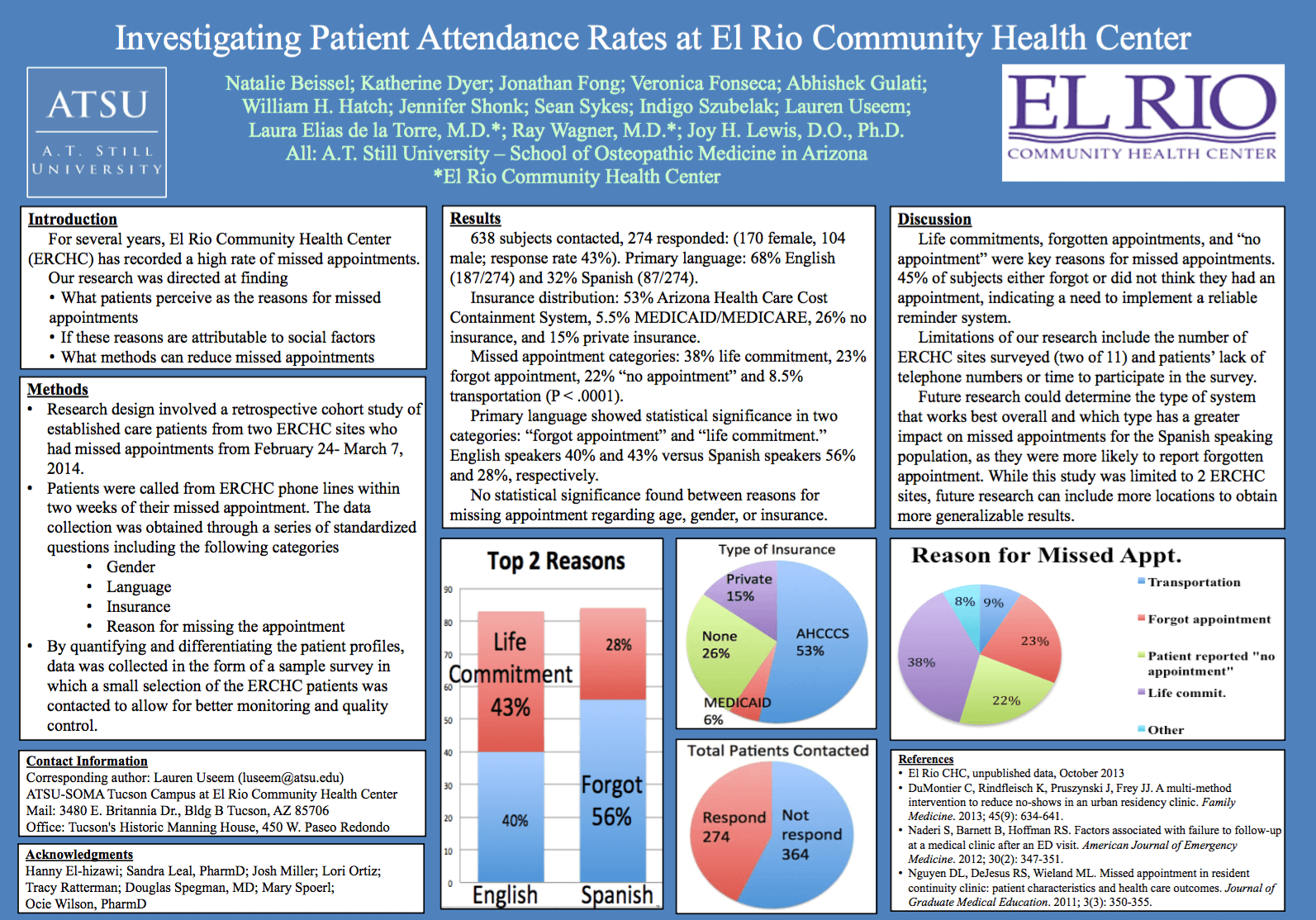 We presented an educational video on diet and exercise pertaining to DM, available in English and Spanish from Healthy Roads Media, during a routine office visit at El Rio Community Health Center...

The aim of this quality assessment project was to determine if the 6% decrease in vaccination compliance among patients less than two was due to provider- controlled lost opportunity for vaccination...