At SOMA, we are geared toward your success. We care about each student’s individual learning path and strive as a community to develop your capabilities to the fullest extent.

As a student, you receive specialized instruction from renowned faculty members in an academic environment that supports your success. Our goal is to ensure you become a remarkable Doctor of Osteopathic Medicine. As a community, we are invested in your success. We follow-up. We stay connected. We focus on your individual learning path. That’s why SOMA students understand that the school cares. The mission to service is not just to provide care to improve whole-person healthcare in communities. It’s also a mission to serve each other, as colleagues. This is the SOMA way.

This study aims to assess the influence of time to follow-up from date of release from DC Department of Corrections to presentation at Unity Health Care Health Centers on control of HIV. Additionally, we examined the effect of patient comorbidities on HIV as measured by viral load and CD4 count.

Retrospective analysis of HIV+ individuals, released from DC Department of Corrections who followed up for care at a Unity location from 2009-2014. Demographic and clinical information included: viral load, CD4 count, comorbidities (Axis-I mental health, homelessness, diabetes, obesity, asthma tobacco, IV drug and alcohol use), time to follow up care from release and number of visits. Time to follow up was also considered as a categorical variable analyzed in 5 groups: 0-30, 31-90, 91-180, 181-365, and 366 days or more. Bivariate and multiple-variable analyses evaluated the relationships between time to follow up, comorbidities and HIV control using SAS 9.3.

Population included 105 patients, 82 with 2 or more visits. Data were analyzed in 5 groups based on time to follow up as a categorical variable. For the whole population, viral load was 24.3% of mean for patients that followed up within on month (P=0.0006) of release. for the 82 the group who followed up between 181-365 days (n=9) had lower viral load compared to every other group (p=.0031 to .0408). Of the comorbidities, the association between asthma and most recent CD4+ count trended toward significance (p=0.1078). Most recent CD4 count trends toward positive association with number of visits (p=0.0645).

Our dataset consists of patients whose records were available to us via Unity Health Care’s electronic medical records from 2009 to 2014, those of whom returned to Unity Health Care for multiple visits. Consequently, our dataset had a limited sample size (n=82). Furthermore, during the de-identification process, age and sex were excluded variables from the database. Of our sample, 98% were African American. Additionally, individuals may have received follow up HIV care at other facilities throughout the DC metropolitan region. Hence, our study has various limitations, which may preclude application of our findings to areas with dissimilar demographics.

We found viral load was lowest among those who followed up between 181-365 days. Asthma was positively associated with CD4 counts. Acuteness of comorbidities may affect continuity of care. A positive trend was found between most recently measured CD4 count and the total number of follow up visits. Our findings are preliminary given the limited nature of our analysis. However, our project raises awareness and paves the way for further investigation on HIV positive ex-offenders, one of the more vulnerable subsets served by Unity Health Care and other community health centers. 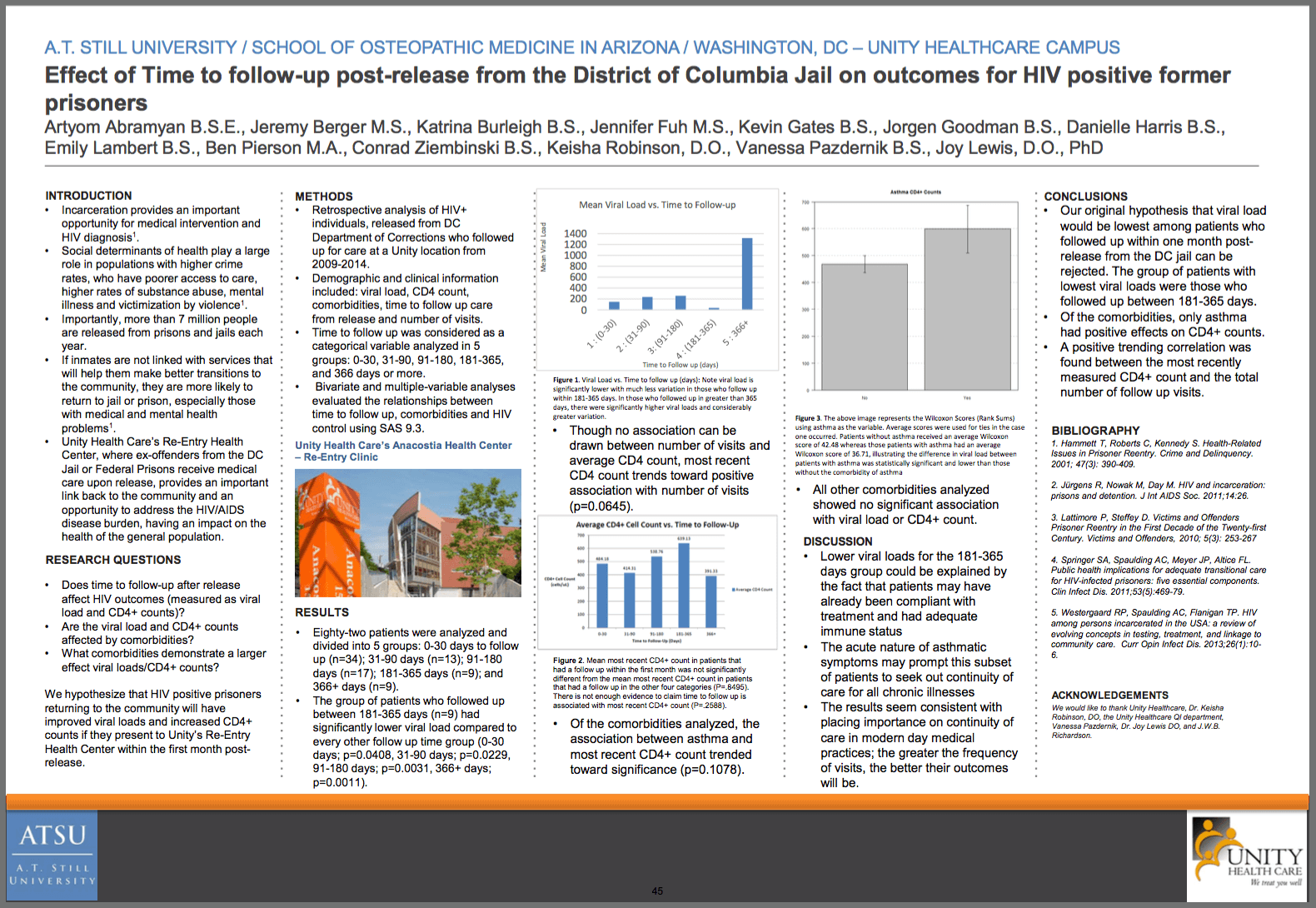