Medical and Social Barriers in the Lowcountry of South Carolina

Community-based medical practice is at the heart of the SOMA experience. As a medical student, you gain hands-on experience in a community health center after your first year. In fact, SOMA is the only medical school in the country with a relationship with the National Association of Community Healthcare Centers. Each medical student participates for three years in practicing community healthcare at one of the school’s Community Campuses.

SOMA students have a desire to make a difference in society. This is a fundamental part of A.T. Still University’s long tradition of service to underprivileged communities. As a Doctor of Osteopathic Medicine, you become part of a medical school culture in which a mission to serve is a critical part of your orientation as a doctor.

Providers at BJHCHS were approached and asked to participate by taking a pre and post survey and attending an education session. The surveys assessed physician knowledge related to HIV and their testing practices. Data presented after the pre-survey included the number of HIV tests performed at all BJHCHS clinics and prior research concerning patient attitudes towards HIV testing at BJHCHS. After the education session, participants completed a post-survey. Univariate and bivariate analyses were performed. The number of HIV tests performed by participating providers’ clinics from June – Oct 2013 was compared to tests performed from January- March 2014.

The data from our research identified several reasons why physicians do not offer more HIV testing at BJHCHS. While the number of tests performed did increase after our presentations, we cannot determine if this increase was a result of our intervention or due to chance. We plan to present the findings of our research to BJHCHS in order to encourage further HIV testing. Future research is needed regarding effective ways to improve HIV testing rates, and to determine if provider perceptions of patients (i.e. lacking HIV risk factors) match with CDC HIV testing guidelines.

The primary limitation of our research project was a small sample size (n=13), and the short time duration of the study. In addition, the presentations were conducted in the morning at department meetings, before the physicians started seeing patients, which could mean they were distracted and more focused on the day ahead. Calculating the number of HIV tests offered post-presentation for more than three months would provide a more accurate average of tests performed per month. 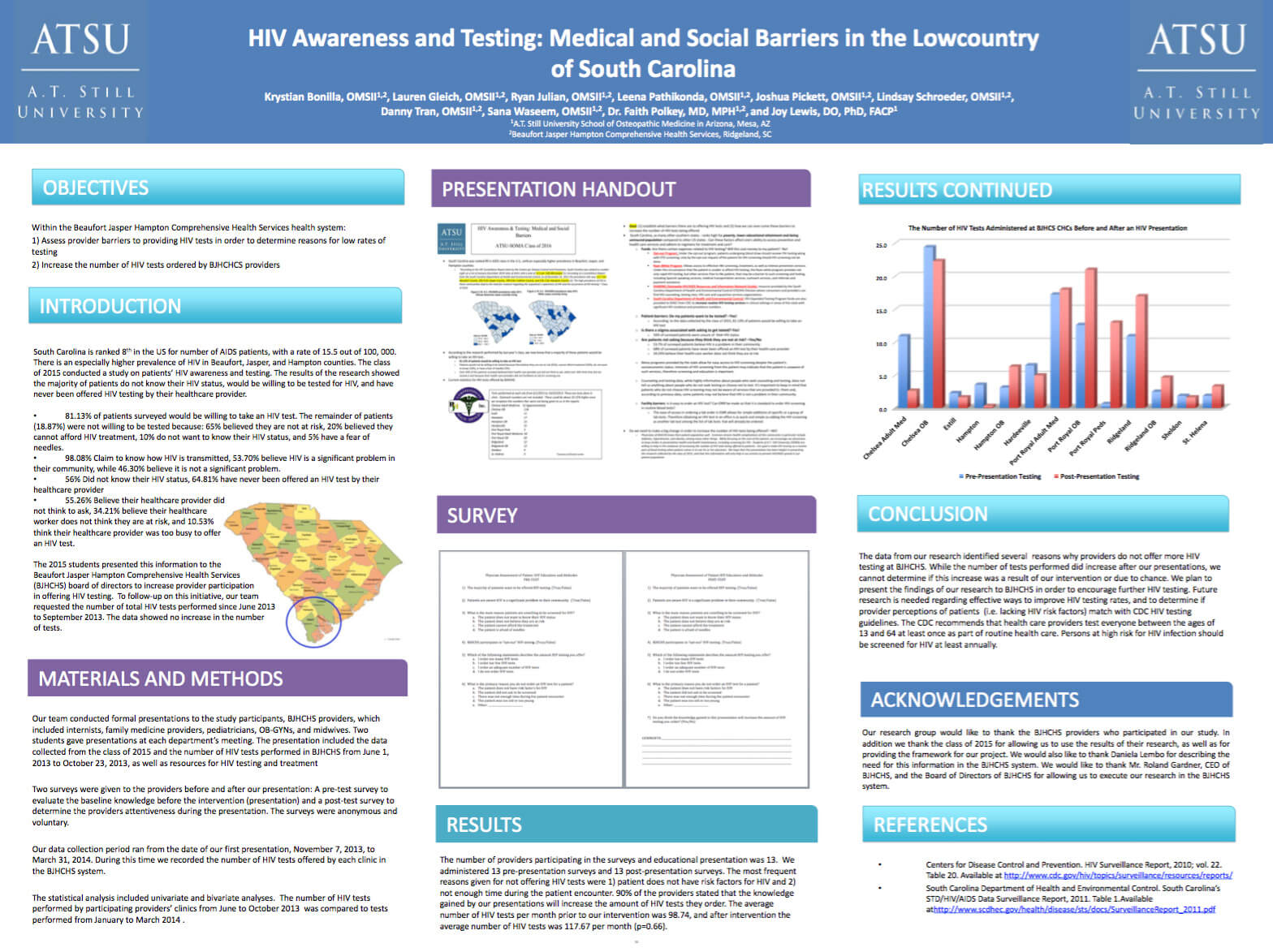 The purpose of this study is to determine if there was a correlation between obesity and vitamin D deficiency in the Hispanic pediatric population in Sunset Park, NY...

Developing the Workforce of the Future