Dedicated to improving healthcare in communities across the country, SOMA has a unique mission to serve that shapes its educational curriculum. Faculty, students and alumni all share a strong commitment to improving whole-person healthcare and public health.

With one year of course work and three years spent gaining hands-on experience in community medical centers, students at SOMA are more directly immersed in improving the lives of traditionally underserved populations. In this way, students earn a medical education of exceptional quality, while gaining a broader understanding of societal healthcare needs.

This type of community-based medical education positions students to make far-reaching impacts in whole-person healthcare and underserved communities. A Doctor of Osteopathic Medicine from SOMA empowers students to contribute their talents and careers to making a real difference in society.

Deciding whether or not to seek out emergency care can often be a difficult and cumbersome question to answer. Each year more than 20 million children in the United States seek medical care in emergency departments (EDs). Between one third and one half of these visits are for non-urgent conditions. (Phelps K, 2000). The Emergency Department is considered an inappropriate source of care for non-urgent health care needs. A lack of public understanding leads to an overwhelming strain on our emergency care providers, with over one-third of all emergency department (ED) visits being “avoidable,” or treatable in primary care settings (Choudry 2007). Students from ATSU-SOMA partnered with HealthPoint to identify common patterns of behavior by the parents of HealthPoint children that lead to overuse of local Emergency/Urgent Care facilities for non-critical care situations, and then to educate and increase parents knowledge of when it is appropriate to visit these facilities.

Our purpose is to identify common patterns of behavior by the parents of HealthPoint children that lead to overuse of local Emergency/Urgent Care facilities for non-critical care situations, and then to educate and increase parents knowledge of when it is appropriate to visit these facilities. This will be tested by an initial survey that presents common childhood clinical presentations to parents, and asks the patient, in a standard Likert 1-5 scale, of whether or not the clinical presentation warrants taking their child to an emergency department. The patient will then be presented with educational materials, a book titled What to Do When Your Child Gets Sick that teaches proper triage techniques for parents. Last, after a two month period, parents will be given a post-educational survey indicating if the book was used by the parent, what chapter was most valuable, whether or not their child presented with an illness in the elapsed time, and how useful, the book What to Do When Your Child Gets Sick ranked with a standard Likert 1-5 scale. The working hypothesis is that parents or legal guardians are frequently utilizing emergency care facilities in non- urgent situations, and a common barrier for choosing correct facilities is a lack of ability to effectively triage critical versus non-critical illness by the parents.

Research Sites, including type of facility (include letters of cooperation from institution other than A. T. Still University)

The research will be conducted at seven of the HealthPoint CHC locations, HealthPoint Auburn, Bothell, Federal Way, Kent, Redmond, Renton, and SeaTac. These facilities serve as primary care facilities, and do not contain an Emergency Department.

There are six required inclusion/exclusion identifiers. Participant Inclusion Criteria includes that the participant is (1) an English or Spanish-speaking, (2) literate (3) parents of at least one children 8 years old or younger (4) who is an established patient of one of the seven HealthPoint CHCs (at least one previous visits to any of the HealthPoint facilities),

(5) presenting to HealthPoint clinics during the students scheduled clinic rotations.

The Exclusion Criteria of a non-English or Spanish speaking participant is due to the limit of the book being available only in these two languages. Exclusion criteria are parents who do not have at least one child under eight years old, any non-established HealthPoint patient.

The participant, (i.e. parent of the established HealthPoint pediatric patient), at admission to a pediatric primary care office visit at one of the seven sites, who meet inclusion requirements will be invited to complete the initial survey. Before completing the survey, the participant will fill out an informed consent form indicating his/her agreement to participate in the study and a post-education survey. The study will be conducted over a two month period for each participant, beginning at the first visit with the student at a HealthPoint CHC site where the participant completed the initial survey, and concluding with the post-educational survey two months after initial presentation. The parent will be given a pre-test survey testing his/her understanding of and attitudes toward Emergency Room usage. Then the parent will be given the book What To Do When Your Child Gets Sick and receive instruction on how to navigate its contents. After a two month period, a post- educational survey will be conducted, seeing if an Emergency Room visit had been used in that time period for the child under 8 years old, and if there was a change in attitude or understanding of when to utilize ER facilities, as well as a survey of whether or not the book was a valuable resource for the parent and/or family (i.e. did they use the book and which chapters were most valuable).

Data collected in the areas of the concerning headache with a increasingly stiff neck, fever, inability to keep foods down, ear pain, and a cold that persisted more than a week revealed a sharp distinction that most parents were split on the issue of what they deemed appropriate use of the emergency room. Preferred answers (5) did not correspond to what parents answered as their acceptable response, showing a markedly different response between all parents. In review of data it is apparent that the only issue parents felt comfortable answering as an „emergent situation‟ was testicular pain that scored under a 1 for standard deviation, subjectively matching approved score of 5. Questions that appeared to be highly concerning included the following: 1) Bleeding from the ears, 2) Throat burning or welling due to an allergic reaction, with difficulty breathing, 3) Eating or drinking poisonous chemicals, 4) Lips turning blue or breathing quickly. All issues were within suggested limits of the study leading to the data sets under standard deviations of 1.

Gathering data about how parents perceive educational material as well as answering questions related to medical situations yielded data that described general trends in HealthPoint parents. Though our project did not yield quantifiable follow up data, there was strong anecdotal evidence of its overall positive impact on patients, their families, and health care delivery. Based on the numbers and our interactions, it is clear that What to Do When Your Child Gets Sick provides valuable information to families; its ease of use, comprehensiveness, Spanish translation, and vocabulary level made it very well received and very much appreciated. However, it is also evident that having health care workers (in this case, medical students) in the room to explain the book's use and answer questions emerged as a vital piece in the study's overall impact. Extended interactions with families opened up multitudinous avenues of communication, ranging from learning English, familiarization with American culture, and, of course, health care; from worries about being a new parent to finding local dentists, we believe that even simply administering the survey helped to provide essential information to families. The project yielded a different outcome than we originally anticipated, with additional corrections, the project was largely beneficial to both HealthPoint and the variegate community that it serves.

A retrospective analysis of the data questions pointed to a few inadequacies of two of the questions. The question involving a fever of 100° F provides a value that is not deviated enough from normal to provide an adequate assessment of patient understanding. The second question involved sudden testicular pain, which is a clinically significant situation but is not covered in the book provided to the parents. All clinical questions surveyed should be covered in the material provided. Another source of error in the project was in how the book presented the adequate intervention steps to the parents. There seemed to be lack of clarity in determining whether the parent should call a physician‟s office in the clinical scenario provided versus take the child to a physician‟s office. By specifying the need to take the child to an office, this error could be avoided. The overall project brought to light the importance of educating parents on what to do when their children get sick. Additional survey questions were proposed to tackle new questions brought up by a retrospective look on the project. To try and gauge the patient‟s future use of the book, including a survey question on the matter would be valuable, such as: on a 1-5 scale, of initially how valuable would you rate this book? (1=never use, 5=use on every sick occasion). An additional note for the continuation of the project in the future could involve more education during the initial survey. While answering the survey questions, many parents expressed concern about knowing the “right” answer. Additionally, lack of presenting medical knowledge about the given situations was not necessarily the most relevant in their decision-making process, which lead to additional concern about answering the survey “correctly”. 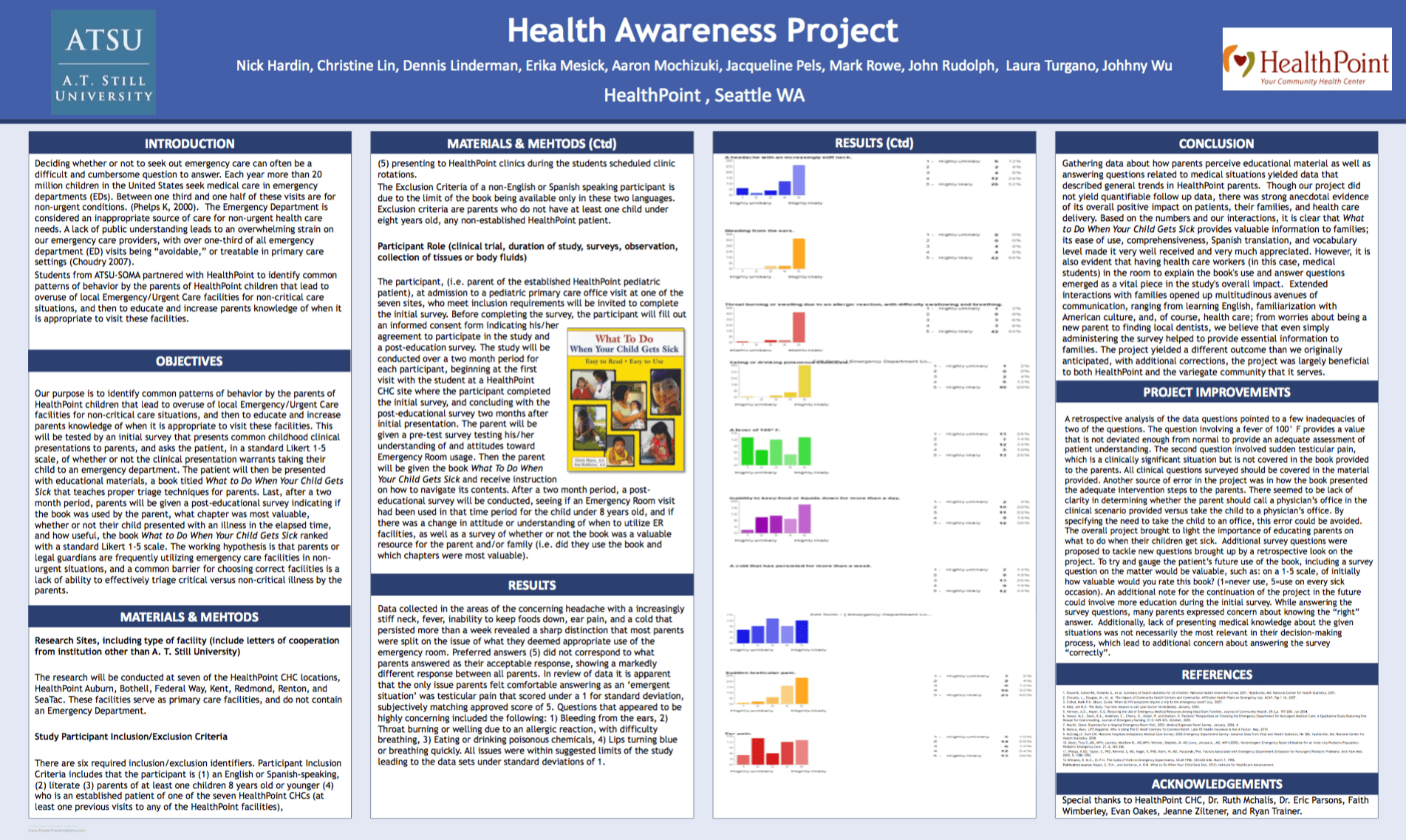 To evaluate the effect of a community health center based sodium intake reduction intervention on patient systolic and diastolic blood pressure.

The Mini Doc program was an educational intervention focused on providing underprivileged elementary students with knowledge on healthy living.